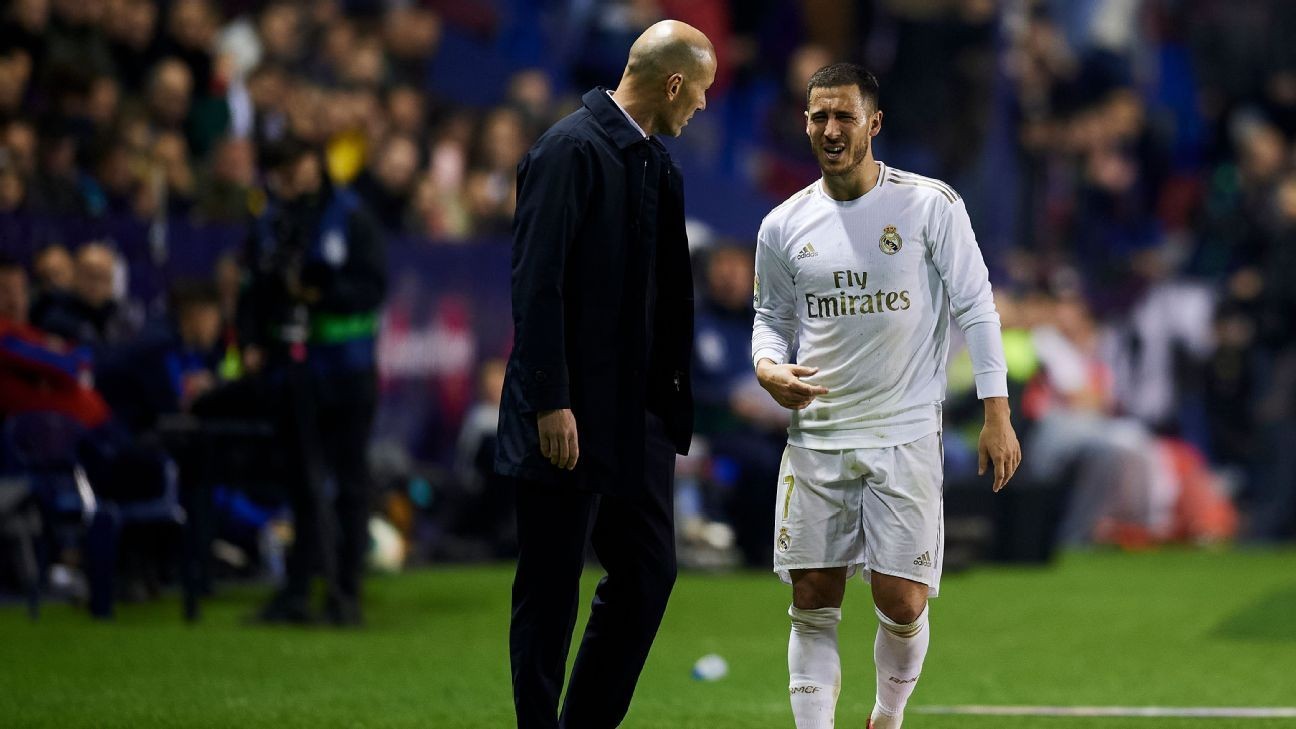 Zinedine Zidane has said Eden Hazard "isn't afraid" of suffering another serious ankle injury but admitted the €100 million Real Madrid star has been bothered by pain which caused him to miss the club's last two matches.

Hazard, 29, has had a difficult first year in Spain, suffering an ankle fracture in November and again shortly after his return three months later. That injury required surgery in March and Hazard was expected to miss the rest of the season before La Liga's suspension gave him a second chance.

"It is just discomfort, it is not a relapse at all," Zidane said on Thursday in a news conference ahead of Real Madrid's game with Alaves. "He trained today as normal. I hope Eden will be with us for the four games we have left and then in the Champions League."

Hazard was hurt against Espanyol on June 28, missed the matches with Getafe and Athletic Bilbao and had not played a full part in training earlier this week.

"He wants to be with us. He isn't afraid. The only thing is that it's the third time." Zidane said. "Our people have explained it to me and they say the scan is all clean, it is perfect. Sometimes it hurts him a bit and that is normal after a game or after a tough training session. Tomorrow he will be with us."

Real Madrid can restore a four-point lead over Barcelona at the top of the table with a win against Alaves at the Estadio Alfredo di Stefano on Friday.

Striker Luka Jovic won't be involved, remaining in self-isolation as a precaution after a friend who was visiting from Serbia tested positive for the coronavirus.

Jovic has also experienced a turbulent season, struggling to make an impression at the Bernabeu before facing criticism in Serbia for breaching lockdown rules and then breaking his foot before the return to training.

"These things happen," Zidane said. "He hasn't been happy, above all, with the injury. He is a really good player, a forward who scores a lot of goals. It is true he hasn't played much but he is young, we are counting on Luka for next year.

"This year a lot of little things have prevented him from being with us, but as a footballer he is good, that hasn't changed."

The Real Madrid coach also revealed that Vinicius Junior missed training on Thursday after "an error" in his latest coronavirus test.

Madrid go into the Alaves game with a makeshift defence, with captain Sergio Ramos and right back Dani Carvajal both suspended, and left back Marcelo injured.

"Marcelo has a little injury, that is why he didn't train this morning," Zidane said. "We will see in the next few days exactly what it is, he has a scan tomorrow."