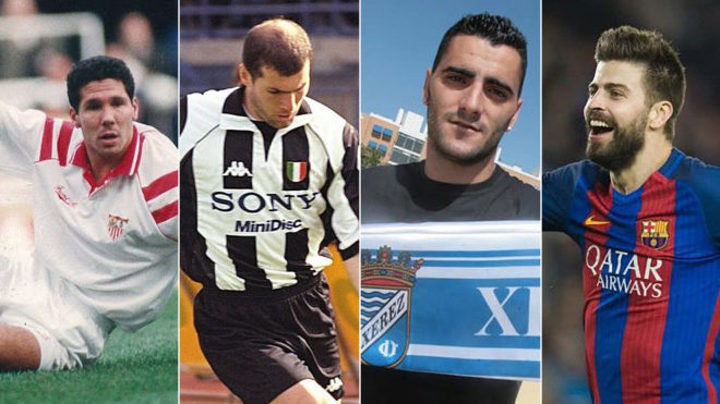 However, if you go back to the early stages of their careers, it wouldn't have been so strange because of what they'd said.

We've dived into the newspaper archive to pick out the best examples.

The Mexican defender was part of the best Barcelona team of all time. He played for the Blaugrana between 2003 and 2010, winning everything there was to win.

However, in an interview with MARCA in 2001, Rafa Marquez revealed his desire to play for Real Madrid.

"The truth is that I see myself wearing the white shirt," he said.

As you can imagine, those words can back to haunt him when he did actually join Cadiz.

"I want to apologise, I said a lot of nonsense," he said in his presentation there.

"Saying anything else would be a lie and, as a professional, it's normal to aspire to play for one of the big teams."

"In Spain, there are two clubs that every player wants to play for: Barcelona and Real Madrid," Zinedine Zidane told Don Balon while he was still a Juventus player.

"Between the two, I prefer Barcelona.

"They always speak about Barcelona and me at my wife's house.

"When I was younger, I liked two teams: Juventus and Barcelona.

"Now I'm playing for Juventus, maybe I can play at the Camp Nou in the future."

The former Barcelona captain's allegiances laid across the divide when he was younger.

"I was true a Madrid fan," he said in an interview.

"I can't deny it. My girlfriend Vanja and I have had an unforgettable week in Barcelona, we went to Barcelona vs Espanyol as two fans with our blue and red scarves," Luka Modric told Mundo Deportivo in 2008.

When the Dinamo Zagreb youngster was asked which number he'd like to wear at Barcelona, he revealed his desire to play there.

"We don't speak about referees, we only play football," Gerard Pique said in 2011 before going back on his word.

"There are two handballs by Bruno, the referees prove me right more and more each week," he said.

"Against the same teams. Eight points. Eight and all that," he also stated.

As for Sergio Ramos, he did it the other way around.

"We don't speak about referees nor do we do it in tweets," he said in reference to Pique during the 2016/17 season.

"No words, simply shameful," he wrote on Twitter some years before, following a Clasico in the Champions League where Pepe was sent off.

"The referee was the difference, there are things you can't fight against," he said after another Clasico.

"I prefer to win the Europa League than finish fourth in the Premier League. If gives you Champions League football as well and it's also a trophy, prestige and means you play in the [UEFA] Super Cup," the Portuguese said while Manchester United boss during the 2016/17 season.