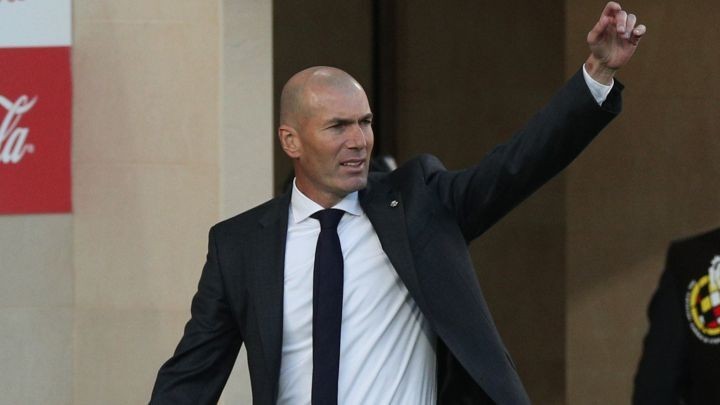 Real Madrid coach Zinedine Zidane admitted he was left frustrated after his side saw out a 1-1 draw against Villarreal, as he believes they deserved more.

Zinedine Zidane spoke to the media after Real Madrid's 1-1 draw against Villareal at La Cerámica, which leaves the LaLiga champions in fourth place. Los Blancos went ahead through an early goal from Mariano, who was handed an extremely rare start in the absence of Karim Benzema and Luka Jovic. But as fatigue set in for Zidane's side, Villarreal found their chance to equalise in the 73rd minute when Gerard Moreno scored from the spot after Courtois fouled Samu Chukwueze.

For Zidane it was two points lost after what he saw as a decent effort from his side, despite the fatigue in the latter stages. Here's what the French coach had to say...

What's your view on the point picked up by your team? Why did you take off Mariano?

One point seems like too little. We deserved much more today for the game we played. I am frustated after the effort the boys put in. And what about Mariano, he hasn't played for a long time, he was exhausted.

Have you won a point or lost two?

We have lost two, clearly.

Zidane on Isco, Odegaard and Hazard

Is it true that Isco has asked you to leave?

No, nothing. We are not going to talk about what happens behind closed doors. But Isco is a Madrid player, he is staying here, he's with us and we don't have to talk.

Was Odergaard substituted because he was worn out?

Yes of course. There was a lot of fatigue. But the effort of the players has been tremendous and there were opportunities to add the three points. It was a shame we couldn't.

How are you handling the criticism you are receiving?

I have the same enhtusiasm and it will always be that way. Don't worry. You continue with what you are doing and I'll continue with my work.

What's your view on Hazard?

He hasn't played for a long time and you have to manage the minutes well. But now he is back with us and is doing well.