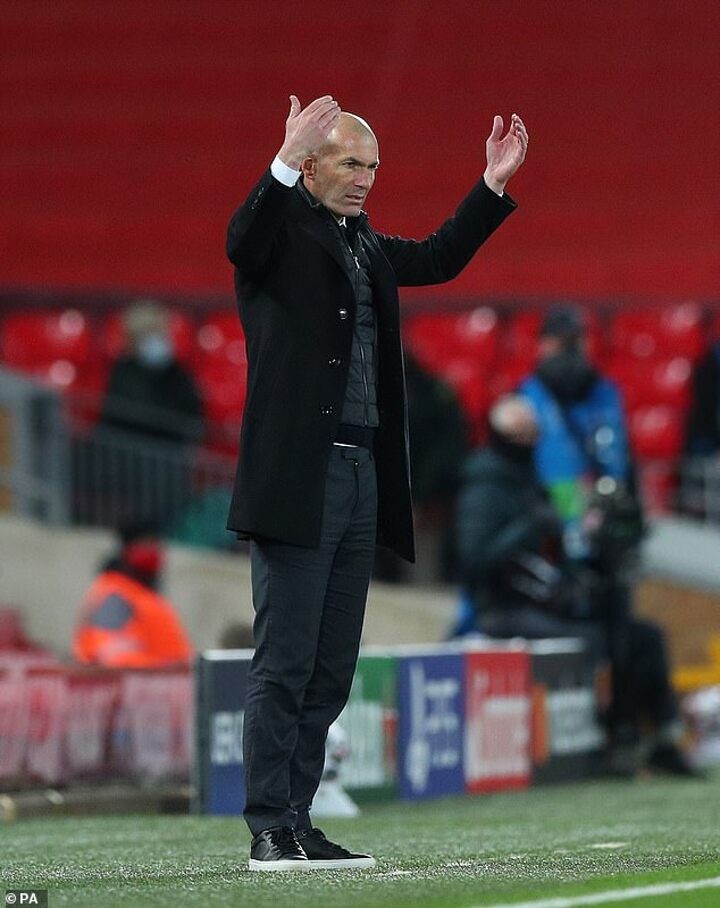 Real Madrid coach Zinedine Zidane hailed his players for 'riding out the storm' against Liverpool and reaching the Champions League semi-finals.

The injury-hit visitors, with an unfamiliar centre back pairing Eder Militao and Nacho Fernandez, held firm in a goalless draw at Anfield on Wednesday to protect their 3-1 advantage from the first leg.

Brazilian Militao was making his ninth start this season while Spaniard Nacho had played little more than half his side's matches, but their assured displays meant Real did not miss first-choices Sergio Ramos and Raphael Varane.

Afterwards Zidane said: 'We have suffered tonight under pressure but we have got through this quarter-final tie,' he said.

'I think we deserve to have got through this round. We knew they would make it hard for us but we controlled parts of the game very well.

'We were very solid. It was a game which was very important for us to get through and we gave it everything we've got.'

'I think we handled the game well, we rode the storm and can be proud of our display.

'We knew they'd start fast and they were really good in the opening 15 minutes, but that's normal.

'In the quarter-finals of the Champions League you have to dig in and we did that and got through.'

The 13-times European Cup winners have reached the Champions League last four for the ninth time in 11 seasons and will meet Chelsea for a place in the Istanbul final on May 29.

Liverpool had far more chances than in last week's defeat but Real's central defenders plus Federico Valverde and Ferland Mendy did enough to keep Mohamed Salah, Sadio Mane and Roberto Firmino at bay.