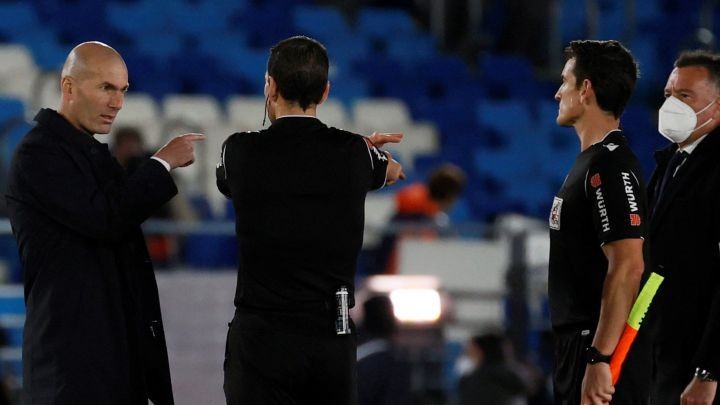 "If there is any contact with the ball and the arm, then a penalty should be awarded on both areas" stated the Real Madrid in the post match press conference.

Real Madrid head coach Zinedine Zidane spoke to members of the press after Sunday's game at Valdebebas where the home side managed to snatch a late point as part of a 2-2 draw against Sevilla. The game was overshadowed by a Eder Militao handball decision that led to the second goal for the visitors.

What did the referee say? Have their explanations convinced you ?:

“I don't understand it...if there is a hand, then there is a hand from Militao but another from a Sevilla player earlier on. I was not convinced by what he told me, it is what is is and he is ultimately in charge. I make a habit of never talking about match officials and decisions but today I am really angry and I'd like someone to explain the handball rule to me”.

Do you see anything strange with these decisions?:

“It's over, that's it. I told the referee that he needed to explain the handball rule, that's it..it's now past tense and now we have to think about our next game and we will battle right to the end,

Is it a problem that many in the game and indeed the Real Madrid coach don't understand the handball rule?

"We could go into this now but it still won't clear the matter up. I'm also annoyed about the outcome of the game as I feel that we deserved more than we got from the game"

"Do you trust the VAR system?":

“I trust in football and in people. I trust referees too, I've never become embroiled about complaining about match officials but today, there was a handball in the Seville area and one in ours and only one spot kick was awarded. It's as simple as that, it's now in the past and we move on".

"How do you feel about the title run-in?:

“The feeling is good. I saw my players hugely committed and they wanted to win the game. We now have big games coming up on Thursday and Sunday and the team will be totally ready”.