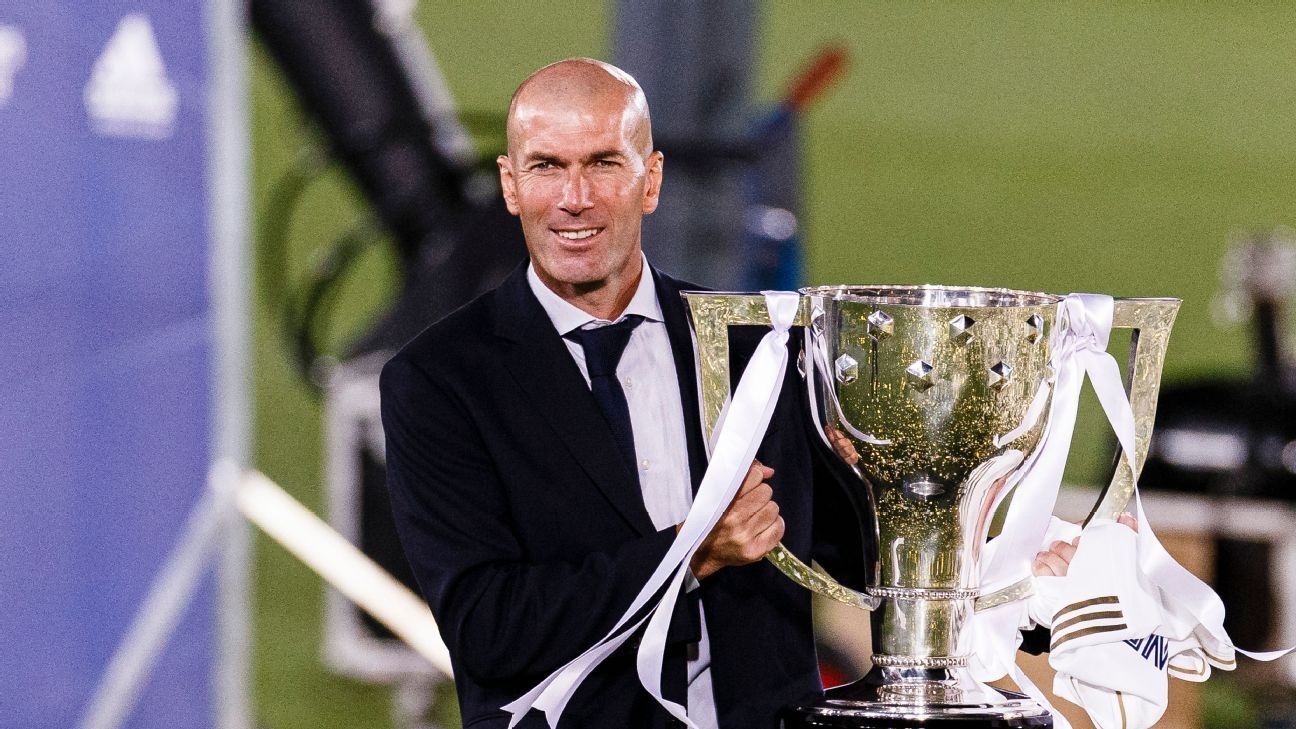 "I'm not going to tell you it doesn't annoy me, because it does annoy me," Zinedine Zidane admitted. "But I can't stop people having their opinions." The problem, he knew, was that it wasn't just "people"; it was those people: men inside the place where he worked, although maybe not for much longer. It was October last year and, while it seems preposterous now and seemed silly even then, Real Madrid's manager was on the edge.

- What did you miss? The latest from Europe's top leagues
- Stream ESPN FC Daily seven days a week on ESPN+ (U.S. only)

Never mind the three European Cups in a row, a feat that's worth repeating. Three. European Cups. In. A. Row. Never mind the 2016-17 league title, one of only two Madrid had won in the previous 12 years. Never mind the fact that he had answered their call for help, returning in a crisis earlier in the year because they needed him when he could have declined and lived off that success forever. The start to the season had not been good; one point from two Champions League games and defeat at Mallorca meant the pressure built, the familiar shadow of Jose Mourinho hovering once more.

Lose at Galatasaray and Zidane might be gone. 'Check,' ran the headline on the front of AS. One wrong move in Turkey and it would probably be 'Checkmate.' Is your job at stake, Zidane was asked on the eve of the game. "I don't know," he said, "that's a question for someone else." So someone else was asked it too, just not the man who could answer it: "Zidane deserves more respect," Sergio Ramos said.

Will Messi leave Barcelona? If so, would he leave for Argentina, MLS or a team with Ronaldo?Zidane: La Liga title sweeter than winning UCLCampeones! Real Madrid celebrate La Liga title success in style

There was more from the captain. Ramos suggested that managers are measured differently -- reflecting his sense that Zidane's successes get silenced while others, say Mourinho's, are amplified -- and pointedly noted that all it would take would be the club to come out and say Zidane was staying, no matter what, and all the speculation would end.

Ramos knew all this "tiresome talk" was not just the papers' doing, and so did his manager, adding quite rightly: "Zidane knows what this club is like. Everyone knows that the dressing room is with him to the death."

Prove it, then. "If you love him, win," ran the challenge on the front of Marca, like a message passed down from above.

They did. And they didn't lose again for the rest of the calendar year. It was 14 weeks before Madrid suffered another league defeat. Nine months on, they are champions again.

This is only Madrid's third title in over a decade; two of them have been won by Zidane in his five years at the club. When he took over as manager the first time, back in Jan. 2016, he reeled off 12 consecutive wins, but Barcelona had already escaped. The league was beyond them, but he couldn't have done more.

When he returned to the Bernabeu as manager for the second time in Mar. 2019, the club was in crisis and the league had gone again. The early form was poor this time, three long desperate months not of his doing. In other words, in the three seasons it was even possible to win the league, he has won it twice.

Then there are those European Cups; a competition that he has never not won as manager of Madrid (he also won one as an assistant to Carlo Ancelotti in 2014). As a manager, Zidane has won 11 trophies in three complete seasons and two half-seasons. Over 209 games; that's a trophy every 19 games. No one can match him.

And yet, somehow, people so rarely seem to talk about him. Not when the conversation turns to the best coaches on the planet, not when it comes to responsibility for results. At least in part because he so rarely talks about it, which is part of his success. There's no grand narrative, no self-promotion, no tactical treatises. There are doubts, the question always hanging: How good is he, really? At least in part because he also expresses them. He is killed with compliments; accused of being only a man manager, as if that most vital of skills doesn't matter somehow. As if there is nothing else, anyway.

In Madrid's hotel in Kiev on the morning of May 26, 2018, the day he won his third consecutive Champions League, conversation in the lobby turned to Zidane's limitations, led by those who should have defended and championed him: Madrid's own hierarchy. He cannot have been unaware of that.

Five days later, he walked away. He didn't talk about the titles he had won, even though there were many, so much as the ones he had not. He discussed his flaws, and his failings, not the history he had made. That Madrid had finished third in La Liga, 17 points behind Barcelona hurt. So did the Copa del Rey exit against city minnows Leganes.

Within a year, he was back. Reluctantly at first, but out of a sense of duty. A sense of destiny too, relishing the fight. When he was under pressure in October, he insisted: "I like the hard moments too, it can't all be lovely."

Zidane wanted to change the culture, no longer blinded by European lights. The league was the real measure, he said, and that was what he wanted. The Madrid identity is forged through the European Cup, the one thing that really matters to many there, so he was countercultural.

He didn't always get what he wanted -- many of the changes he announced didn't happen, the signings he wanted didn't come and the sales he desired didn't go -- so Zidane built a team with the same pieces as he had before, except for the one piece you would want more than any other: Cristiano Ronaldo, the striker who scores you 50 goals a season. The top nine players in terms of starts this season were already there; the 10th is a left-back.

Just a man manager, they said, and there was a lot of that, but he constructed a defence, a structure. He changed the formation and did it often. This is not the same team in shape, ideas or condition as the one he coached before; his hand is visible, not just his familiar face. He backed the players he trusted before, reviving them. They were finished, some said, but they ended up first. The same men who limped to the end last season roared through it this, racking up 10 wins in a row after the restart. Fitter, faster, more focused than ever.

On Thursday, with Madrid having beaten Villarreal to go an uncatchable seven points ahead of Barcelona, Zidane described it as one of the best nights of his professional life. He knew how long the journey had been, how far they had come. He knew that this was a success that didn't come with a "yeah, but" (actually, it did and always would; he knows that). But it was harder to argue this time. It is precisely because the league seems to reduce luck that he craved it so bad.

And yet, asked what was behind the success, he said: "It's the players; I have my role but they're what matters, and they're people before players." He looked at them and expressed his delight at seeing their happiness. They looked at him, grabbed him and threw him into the air.

"Everything he touches is like a holy hand. He's unique and people need to appreciate his work," Ramos said.

When Zidane started his coaching badges, he was driven by a desire to compete, to do something real, to test himself and his team. "I don't know if I will be any good as coach, but at least I want to know," he said. He found out soon enough. Slowly, perhaps more slowly than they should have done, so did everyone else.