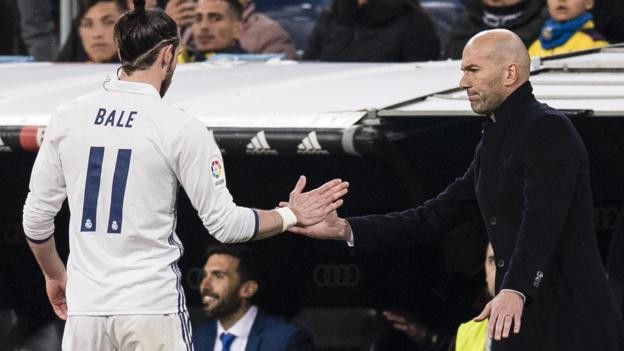 Zinedine Zidane says he is counting on Gareth Bale just as much as the rest of the squad after returning as Real Madrid manager.

Zidane had a strained relationship with Bale during his previous tenure and, according to BBC Sport's Guillem Balague, "does not want to work" with the Wales forward.

Zidane has replaced Santiago Solari just 10 months after he quit his post.

"We all know the player Gareth is. We are ready, he is ready," said Zidane.

Bale has been booed by home supporters this season, although his agent has insisted the 29-year-old wants to "play all his career" at the club.

"I am not going to talk about Bale's season, I only talk about the 11 games we have left," added Zidane. "I am counting on him like everyone else.

"We have to think about finishing the season well. You do not have to be thinking about who stays or goes, everyone has a contract here, then we will see what happens.

"It's like the first day again. Even if it's not new, it will be something different, it does not have to be the same thing. I am excited to have a new adventure."

Solari was sacked on 11 March following a dismal period during which the reigning three-time European champions exited the Champions League against Ajax and suffered back-to-back domestic defeats by Barcelona.

Real's season now comes down to their 11 remaining league fixtures, starting against Celta Vigo on Saturday.