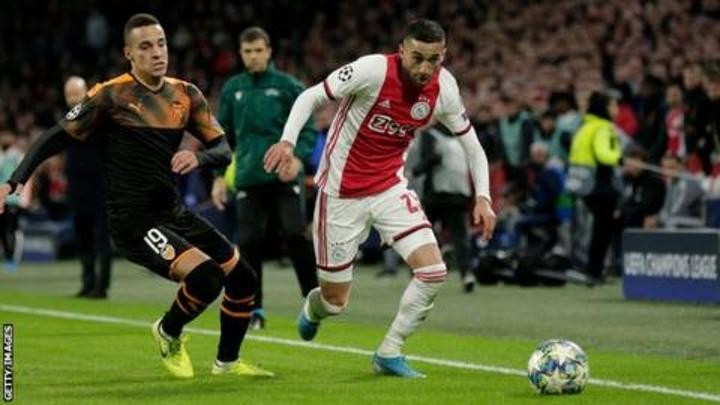 From captaining a club in crisis in his early twenties through to shining on Europe's biggest stage, Hakim Ziyech has experienced much on his journey from street footballer to becoming Chelsea's latest signing.

The Dutch-born Morocco midfielder is poised to head to London this summer after Chelsea agreed a fee with Ajax that could rise to more than £36m.

While any big-money transfer to the Premier League comes laden with expectation, 26-year-old Ziyech has already shown he is no stranger to adversity or pressure.

The youngest of eight children, his father died when he was 10, leaving his mother to raise a large family on a modest income.

Football became a particular focus for the family, with two of Hakim's siblings holding aspirations of making it in the game.

But as their hopes faded, it instead fell to the youngest Ziyech to keep alive the dream.

He had honed his talents on the streets of the Dutch town of Dronten, eventually graduating to the academies of local clubs Reaal and ASV, before his big chance came when he joined Heerenveen as a 14-year-old in 2007.

He soon made an impression at the Abe Lenstra Stadium - his first-team bow coming at 19 - and before long the club was providing Ziyech with a springboard to success.

However, joining FC Twente in 2014 in the midst of the club's financial crisis brought unique challenges, as did his 2016 transfer to Dutch giants Ajax, where he would find himself caught up in fan unrest as the club endured a five-year title drought.

"In my eyes he is unbreakable," says Dutch football writer Marcel van der Kraan. "He's been through a lot in his life and he then had a difficult start at Ajax, with the fans on his back and confronting him.

"Marco van Basten [his former coach at Heerenveen] didn't see a great future for him and he let none of that affect him.

"Twente were on the edge of bankruptcy and as the captain at a young age, he had to appear in front of the press every week and answer questions that should not have been addressed to him but the club's board.

"He let his feet do the talking and handled it all in his stride and I think that has made him."

Ziyech's difficult relationship with Ajax's fans peaked after a 3-0 defeat at PSV Eindhoven in April 2018, a result that confirmed their great rivals as Dutch champions.

The midfielder was reportedly singled out for criticism when some Ajax fans brought the club's team bus to a standstill on its return to the Amsterdam Arena after the match, but he has since transformed his relationship with supporters.

He shone last season, scoring 21 goals and providing 24 assists as Ajax won a domestic double, and came close to reaching the Champions League final only to be denied by Tottenham's extraordinary late second-leg fightback.

Ziyech also contributed to three Ajax goals in a 4-4 draw against Chelsea during their Champions League group game in November of this season.

"His performances in the Champions League for Ajax have been astonishing," Van der Kraan continued.

"The same crowd booing him have been screaming his name positively, now they regret the amount he is leaving for because they think he is worth £100m."

So what exactly are Chelsea getting for their money?

The attacking midfielder has provided 421 goalscoring opportunities for his Ajax team-mates since joining them in 2016 - 134 more than any other player in the Dutch top flight.

Since 2018, he has also provided more assists than Lionel Messi in the Champions League, with only Kylian Mbappe and Riyad Mahrez ahead of him in that department.

A sledgehammer of a left foot and the ability to beguile opponents in tight situations are also key attributes.

"In the Netherlands, there are small cages or squares called 'pleintjes' and Ziyech is a 'pleintjes' footballer," Van der Kraan continued.

"He is someone who can trick himself out of any situation and when there is only 10 inches of space, still take on a player and beat him.

"What will encourage Chelsea are his performances in Europe against the top clubs. He has not produced a 'no show' against anyone and that's the sign he's ready.

"Chelsea's interest in him grew after the sides met in the Champions League. They saw what he was really capable of and Lampard was able to study him closely from five yards away."

A sociable, humble guy with 'a very big heart'

While Ziyech's talent led to caps at Under-19, Under-20 and Under-21 levels for the Netherlands, he switched allegiance to Morocco in 2015 and helped them reach the World Cup finals in Russia in 2018.

However, fans in Morocco are yet to place him on the same pedestal as some of the country's legendary players.

"He is not seen as the ultimate star yet," says Moroccan journalist Jalal Bounouar.

"Supporters are looking forward to seeing him lead the team to titles. People here look back to the side that won our one and only Africa Cup of Nations in 1976 and we've also had the likes of Mustapha Hadji and Noureddine Naybet.

"Ziyech, though, is someone Moroccan fans are proud of because he chose to play for Morocco and has always spoken well about the country.

"He's also someone that is a sociable, humble guy. When he turns up at the national team training camps you can see him laughing and mixing with the group.

"And he doesn't treat people who are playing in the Moroccan or Egyptian leagues differently to the players who are based in Europe and is also someone who offers the young players advice and helps them."

Ziyech's altruistic nature was also highlighted when he offered financial support to Leon de Kogel in 2019 after the Dutch footballer's career was ended in a car crash while on holiday.

"Ziyech is not only the best player in the Eredivisie, but also someone with a very big heart," De Kogel would say later.  "I will carry this with me all my life."