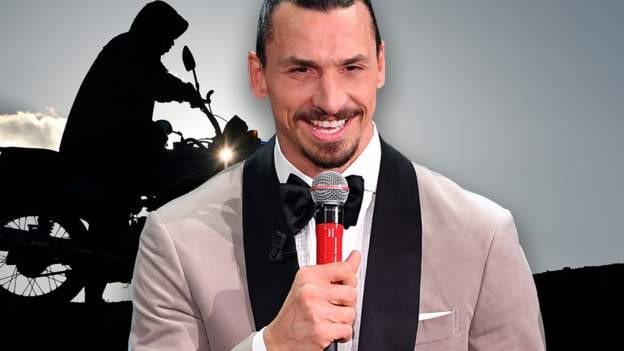 Zlatan Ibrahimovic is putting himself in the limelight again

If he's not trading insults with former team-mates in heated Milan derbies, then he's attempting to lecture global icon LeBron James about mixing politics and sport.

Another day, another Zlatan tale. On Thursday, he revealed that he hitch-hiked to a music festival on the back of a stranger's motorbike this week and then performed onstage.

You have to admire Zlatan's dedication to being Zlatan.

The 39-year-old veteran footballer has revealed that he convinced an AC Milan fan to take him on a 60km ride to the stage at Sanremo after being held in traffic for three hours.

"There was an accident on the motorway. After three hours in the car I told my driver to open the door to let me out," he said.

"I stopped a motorcyclist and asked him, 'can you take me to Sanremo?'"

There was a touch of serendipity to this meeting too.

"Luckily he was a Milan fan."

Ibrahimovic can also perhaps count himself lucky that he arrived in one piece.

"When we got here he told me, 'That was my first time on the motorway'," he added.

Once there, he went on to perform an awkward duet rendition of 'La Vagabondo' on stage with Bologna boss Sinisa Mihajlovic, with whom he's good friends.

Earlier this month, Ibrahimovic criticised fellow athletes who publicly speak about politics and claimed they should stick to what they're good at. On the back of this performance, one could possibly accuse him of hypocrisy. It's not exactly the most harmonious turn we've ever seen.