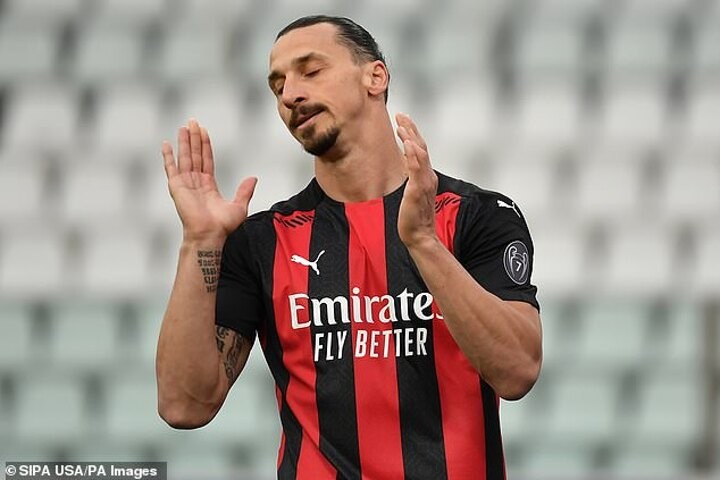 Zlatan Ibrahimovic was reportedly pictured in a Milan restaurant over the weekend while the city was in a coronavirus lockdown as the AC Milan striker once again hit the headlines for his actions off the pitch.

Italian news website Fanpage.it published photos it says were taken at lunchtime on Sunday of the Milan forward with friends, including former team-mate Ignazio Abate, all without masks and surrounded by wine glasses, in the restaurant which should have been closed to on-site diners.

Sunday was the last day of lockdown in the Lombardy region where Milan is located and several other regions with improving Covid statistics.

Lombardy will be reclassified from a 'red zone' area to an 'orange' area, where people face fewer travel curbs and shops can reopen, although a ban on dining in bars and restaurants remains.

The restaurant's owner, Tano Simonato, defended the story to Fanpage, insisting that the group, which he says also included former Milan star Abate, had not eaten in the restaurant.

A source from Ibrahimovic's entourage claimed to AFP that the Sweden attacker was there for a 'work meeting'.

'They didn't eat, as friends we had a glass of wine,' Fanpage quoted Simonato as saying.

The photos caused  more controversy because in the autumn Ibrahimovic, who contracted Covid-19 in September, promoted social distancing and mask wearing for the Lombardy regional government.

It has been a busy start to the year for Ibrahimovic, who has starred for Milan since returning to the Serie A club midway through last season.

In March he co-hosted Italy's Sanremo music festival and in January was accused of racism after taunting Inter Milan striker Romelu Lukaku over voodooism.

He also got into a spat with NBA superstar Lebron James in February when he said athletes should 'stay out' of politics, mentioning James by name and calling him out over his political activism.

Los Angeles Lakers forward James responded by saying he was 'the wrong guy to go at because I do my homework'.

James helped found the More Than a Vote organisation which boosted voter turnout in Black areas during November's USA presidential election, organising more than 40,000 volunteers to work at the polls.

Ibrahimovic has scored 15 times in 17 Serie A appearances this season, but was sent off in Saturday's 3-1 win at Parma.