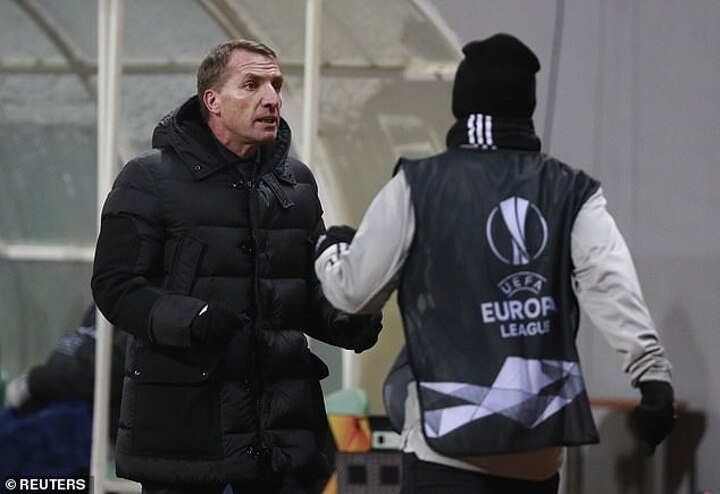 Brendan Rodgers suffered a miserable night in Ukraine as Leicester missed the chance to seal top spot in their Europa League group and Caglar Soyuncu was injured on his comeback.

In near-freezing temperatures against Zorya Luhansk, key centre back Soyuncu lasted only 15 minutes after being out since early October with a thigh problem, and the home side rubbed salt into the wound when substitute Allahyar Sayyadmanesh scored the winner six minutes from full-time.

Along with Soyuncu, Rodgers brought back two other stars who had been out injured. Full-back Ricardo Pereira played 45 minutes on his first senior appearance since damaging cruciate knee ligaments nine months ago, and midfielder Wilfred Ndidi lasted a little less than an hour. Ndidi looked the most solid of the three after recovering from his adductor injury.

This result means Leicester – who are already qualified – must beat AEK Athens at the King Power Stadium to be certain of finishing above Braga and improve their chances of a favourable draw in the last 32.

Rodgers had talked up the importance of his three returning players but they all looked shaky early on in a Leicester side without Jamie Vardy, Kasper Schmeichel, Jonny Evans and Youri Tielemans, all left in the UK.

With less than three minutes on the clock, Vladyslav Kochergin breezed inside Pereira and Danny Ward showed impressive agility to keep out the low shot. Shortly afterwards, Ndidi conceded a needless free-kick with a foul on the edge of the penalty area.

But the worst was still to come.

As he ran across to intercept a through-ball, Soyuncu quickly halted his stride and held his thigh. His first game for two months had lasted only 15 minutes and, understandably frustrated, Soyuncu hurled his gloves to the turf.

His fellow Turkey international Cengiz Under was looking lively on the right and wasted an excellent chance to put Leicester in front just after the half-hour mark.

Under was played in by Dennis Praet but slid his finish wide of the far post with his weaker right foot.

Then Ward was on his toes again to push away a ferocious drive from 25 yards by Andrejs Ciganiks. In the closing moments of the half, Harvey Barnes concluded a strong run with a poor finish, and Morgan was perhaps lucky not to be punished for a last-man challenge on Oleksandr Gladkyy.

Rodgers had said on Wednesday that he planned to give Pereira, whose previous first-team appearance was against Aston Villa in March in the final Premier League game before lockdown, 75 minutes here, yet the Portuguese lasted only 45 and was replaced by Luke Thomas for the second half.

Leicester were lucky not to fall behind six minutes after the break when Vladlen Yurchenko's thunderous header bounced back off the bar with Ward beaten.

Wesley Fofana, who had replaced Soyuncu, could not match Yurchenko's technique when his own chance came.

Under's free-kick picked out the young Frenchman in front of goal and from an unmarked position, he planted his header well wide.

They came even closer with 12 minutes remaining. Kelechi Iheanacho found space 22 yards from goal only for Zorya keeper Nikola Vasilj to push away his effort and somehow keep out the follow-up from James Maddison, who had replaced Dennis Praet moments earlier.

James Justin missed another fine opportunity after he was teed up by Maddison.

Leicester were made to pay in the 84th minute when Sayyadmanesh, who had only just come on, turned in a low cross from close range at the far post.

In the final seconds, Under's curler from 25 yards was superbly tipped over by Vasilj.