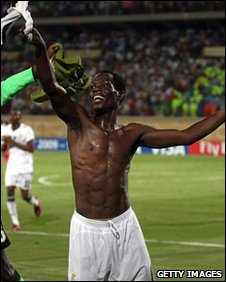 Emmanuel Agyemang-Badu has revealed that his life changed after helping Ghana win the 2009 FIFA U-20 World Cup.

Badu carved his name in Ghana's football folklore after scoring the winning sudden death penalty in the 2009 FIFA U-20 World Cup final against Brazil.

The penalty made Ghana the first African nation to win the FIFA U-20 World Cup.

In the aftermath of the tournament, Badu was drafted into the Black Stars team that finished second in the 2010 Africa Cup of Nations.

Badu also made the team's cut for the World Cup later that year as the five-time Africa champions reached the quarter final stage.

During an interview with Hellas Verona Instagram channel, the 28-year-old disclosed that his life changed after the Youth Championship triumph in Egypt.

“My mother didn't want me to play football, she wanted me to continue my studies. Ibrahim, my first prosecutor, helped me a lot and convinced her after several times that he came to talk to us. The victory of the U20 World Cup changed my life."

Badu is currently on loan at Hellas Verona from Udinese, a team he joined after the 2009 FIFA U-20 World Cup.