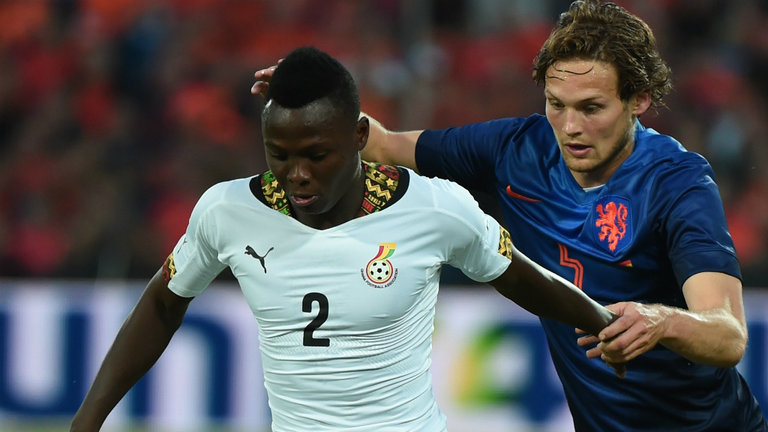 Defender Samuel Inkoom insists he is completely focused on helping Ghana excel at the 2014 World Cup and is not distracted by reported interests by European clubs.

The 24-year-old looks set to play in his second World Cup having been named in the final Black Stars squad for this monthâ€™s tournament in Brazil.

Inkoom has been a subject of intense transfer talk following his impressive loan stint in Greece with Platanias.

The former FC Basel manâ€™s existing deal with Dnipro expires at the end of the calendar year â€“ meaning he can sign pre-contract agreements this summer.

English club Everton are the latest club to emerge as interested suitors for the Black Starsâ€™ right back.

They join a host of other European clubs who are reportedly keen to sign the Ghana international.

But Inkoom who won his 46th international cap in the friendly defeat to the Netherlands over the weekend has relegated all other issues apart from the 2014 World Cup to the background.

"I am only focused on the World Cup at the moment and giving everything for my country as I did in South Africa 2010 where we reached the quarter finals," Inkoom told Sky Sports.

"I believe we have the quality, experience and team spirit to go even further this time around.

"I have left all the interest and talk about my future in the hands of my agent .

"Only when the World Cup is over, then we will sit down and discuss the best direction for my next move.

"Until then, I want zero distractions."

Olympique Lyon, Olympiakos and Schalke are all said to be keen on signing Samuel Inkoom.