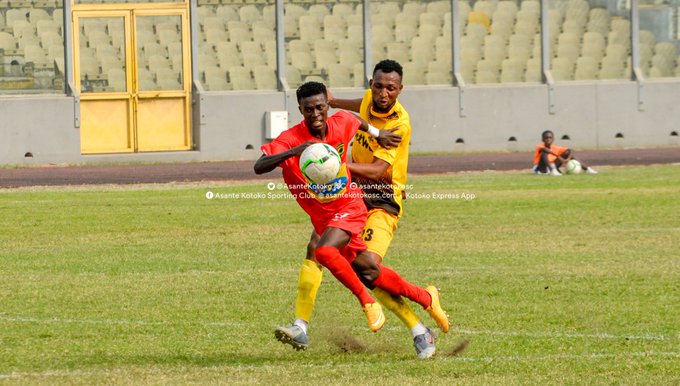 Asante Kotoko once again missed the support of their vociferous fans as they played out a goalless draw with Ashanti regional rivals Ashanti Gold in the Ghana Premier League on Sunday.

The Porcupine Warriors had no fans at the Baba Yara Stadium for the third game running as they dropped points at home yet again.  They were serving at their last of a three-game closed-door ban for hooliganism.

Kotoko were hit with a major blow before the start as midfielder Justice Blay picked up a knock few minutes to kickoff. His injury meant coach Maxwell Konadu was forced to alter his plans which accounted for a slow start.

Ashgold forced goalkeeper Kwame Baah into making a decent save from a direct freekick in the 7th minute.

Four minutes later, James Akaminko hit a shot over the bar from the edge of the box after Kotoko failed to deal with a set-piece.

Imoro Ibrahim had Kotoko's first chance in the 22nd minute but failed to keep his shot on target.

On 26th minute, goalkeeper Kwame Baah was once again called into action. Emmanuel Owusu hit a decent strike from 23 meters out but Baah was alert and prevented the ball from entering the net.

Kotoko had a penalty shout turned down by the referee in the 32nd minute.

Opoku Mensah extends Martin Antwi's pass to Kingsley Effah who controls the ball with his chest before a rush tackle from the Ashgold goalkeeper. Our penalty call is denied.#KOTASH

Augustine Okrah, who buried his father last weekend, was introduced at halftime to improve Kotoko's attack in the second half.

His first involvement almost resulted in the opener.  Okrah's feds on Imoro Ibrahim's corner kick, but the winger's overhead kick has gone across the face of goal to touch.

Ashanti Gold also wanted a penalty in the 52nd minute.

Appiah MCarthy dribble past three markers but goes to ground as Collins Ameyaw wins the ball from him inside the penalty box. The visitors' penalty call is denied by the referee.#KOTASH

Kotoko had the best chance to score in the 62nd minute. First, Martin Antwi's shot inside the box was blocked before Naby Keita headed over the bar from a rebound.

Appiah McCarthy came very close to securing victory for Ashgold in injury-time but his strike hit the upright.

The draw leaves Ashanti Gold and Asante Kotoko first and second respectively on the standings after matchday 10.