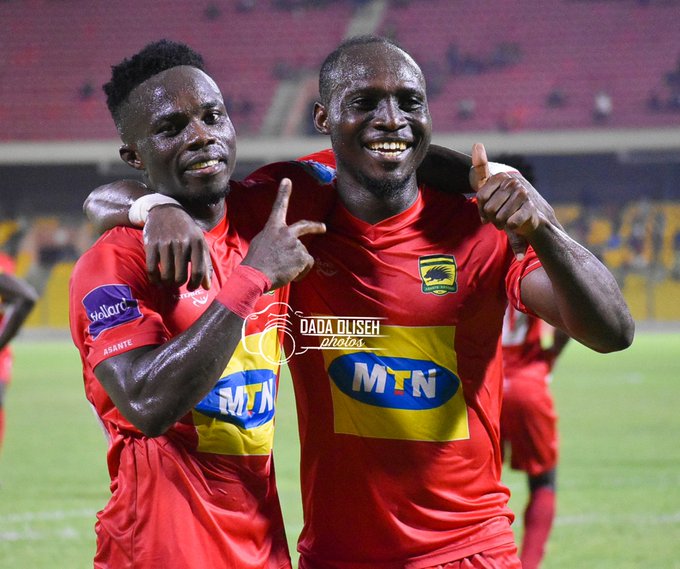 Asante Kotoko came from behind to earn a 3-1 victory over Bechem United at their adopted Accra Sports Stadium in a Ghana Premier League matchday 12 clash.

Having taken just one point in their last two games, the Porcupine Warriors reignited their title hopes as they moved to second on the table with the same points as AshantiGold who will play on Sunday.

Bechem United against the run of play took the lead on 20 minutes. A brilliant cross was directed to the path of Hafiz Konkoni who made no mistake from six yards out as he headed into the net.

Kotoko got close to equalising when referee Kennedy Padi awarded them a penalty after the ball hit the hand of Bechem defender. But the decision was overturned because the assistant referee Roland Addy managed to convince the referee that the defender's hand was in a natural position.

Kotoko were not to be denied in the 37th minute as they grabbed the equaliser. Martin Antwi was at the right place to tap the ball home following a terrible mistake from Bechem goalkeeper Prince Asempa.

Kotoko then went ahead in added time. The goal was synonymous to the first. Prince Asempa made another mistake and Augustine Okrah was there for the easy tap in. The attacker, who previously played for Bechem did not celebrate his goal.

Kotoko returned to the second half more determined. Justice Blay rattled the bar in the 50th minute. Six minutes later, Imoro Ibrahim made it 3-1. The midfielder curled a direct free-kick straight into the net leaving the goalkeeper rooted to the spot.

The win is a great response after a troubled few weeks which saw them fail to win their last three matches including a shock defeat against Asokwa Deportivo in the round of 64 stage of the MTN FA Cup.