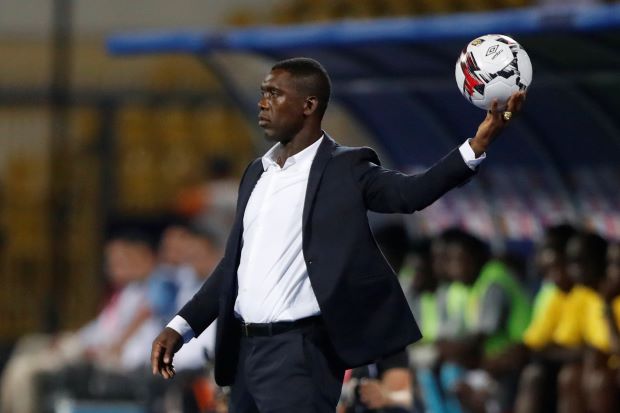 If Clarence Seedorf was not already aware of the high expectations surrounding his Cameroon team before the Africa Cup of Nations, he certainly will be following their first two matches.

In a remarkable media conference following Saturday's 0-0 draw with Ghana, the coach was told that his defence was "appalling" and that Jean Armel Kana Biyik's performance was "a mess" while another reporter asked why his team had not "come out with all guns blazing and tried to win three or four nil".

"Wow!" replied the Dutchman to the question. "This is not basketball although I do like your optimism and faith in the group.

"Ghana are an experienced team with players in important teams in Europe," he explained patiently. "It was a tactical game and I felt we had good control of the match and you need to have respect for a team that has quality."

He also stood up for Kama Biyik, who set up a late chance for Ghana after giving away the ball and was relieved to see Kwabena Osuwu's shot hit the crossbar.

"What have you eaten today?" asked Seedorf in reply to a reporter's withering assessment of the player's efforts. "Kana Biyik has played a proper match although he also needs to grow. He made a mistake, that was obvious for everyone -- nobody is perfect.

"But our defence has been solid and he also made an incredible recovery at the end (of the match) -- maybe you don't remember that but I do. I give a very positive note to our defence today."

Seedorf, one of the outstanding players of his generation, accepted the appointment last August hoping to improve on the lacklustre start to his coaching career.

He was dismissed from his first job at AC Milan after four months in 2014 despite overseeing an improvement compared to his predecessor.

He then had five months as coach of China's Shenzhen FC and in 2017-18 took over at Deportivo Coruna halfway through the season but could not prevent them being relegated.

Saturday's game was his tenth in charge of defending champions Cameroon, with four wins, four draws and two defeats.

Seedorf said he needed to take into account that many of his players had had a long season in Europe.

"We tried to manage the fitness of the players -- it's the end of the season, it's been long for many, that's why we have a group where all the players can be first-eleven players," he said.

"I think all the midfield played well," he added. "Georges Mandjeck is very important player, he is experienced, he knows how to help the defenders, to cover that area very well."

"We could have managed better the ball in some moments... but I thought it was a solid performance against a strong opposition."