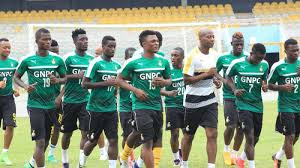 Ghana's defeat at the hands of the so-called minnows Namibia is a clear indication that this month's Africa Cup of Nations is not going to be easy for the Black Stars.

There are no minnows in African football any longer as the teams considered as small are now punching above their weight and getting the desired results.

The Black Stars  lost 1-0 in the in a pre- AFCON friendly match played at the Jebel Ali Centre of Excellence in Dubai on Sunday evening which sent shockwaves.

Manfred Starke scored the only goal of the game around the half hour mark after Lawrence Ati Zigi’s failed attempt to parry the ball ended in his own net.

With this results it must now be clear to the Black Stars that the other teams in their group let alone the top teams in the competition will be difficult to defeat.

Even though a few of the top players did not play the friendly on Sunday, it shows that teams no longer respect or fear the Black Stars and they must not underrate any opponent.

The Black Stars will now turn their attention to their next pre-tournament friendly against South Africa on Saturday before wrapping up preparations for the AFCON.

The senior national team is expected to arrive in Egypt on June 20, five days before they play their opening Group match against Benin.

Ghana will next face South Africa on Saturday in their second international friendly before they travel to Egypt on June 20th.

The Black Stars are pooled alongside defending champions Cameroon, Benin and Guinea Bissau in Group F for the 2019 Afcon