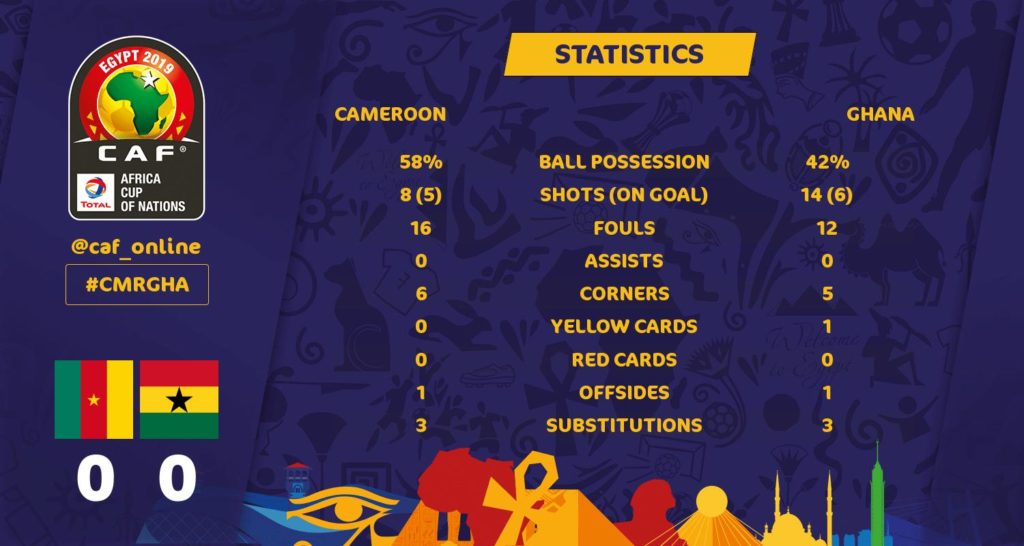 Cameroon completely dominated Ghana in their 2019 Africa Cup of Nations match played on Saturday by getting 58% of the exchanges of the game played in Ismailia.

This comes even though the game shows that the Black Stars were more composed and perhaps threatened more than the Indomitable Lions.

The match between the giants of African football averaged a conversion rate of 0% from the combined 11 shots on goal in the entire game.

Ghana started the game well and had few chances in the opening minutes of the game; Jordan Ayew couldn’t meet Baba Rahman’s early cross to put his side in front.

Richard Ofori was outstanding for the Black Stars after pulling off an amazing save before the end of the first half to keep Ghana in the game.

Cameroon stepped up in the second half but couldn’t convert their chances; Clinton Njie’s header went wide as he would have done better to cause problems for the Ghana defence.

Substitute Kwabena Owusu almost opened the scoring for Ghana with his first involvement of the game but was unlucky as his effort hit the crossbar before going off.

Ghana will face Guinea-Bissau in their final game as they will be looking to get a positive result in the encounter to enhance their chances of qualifying to the next round.