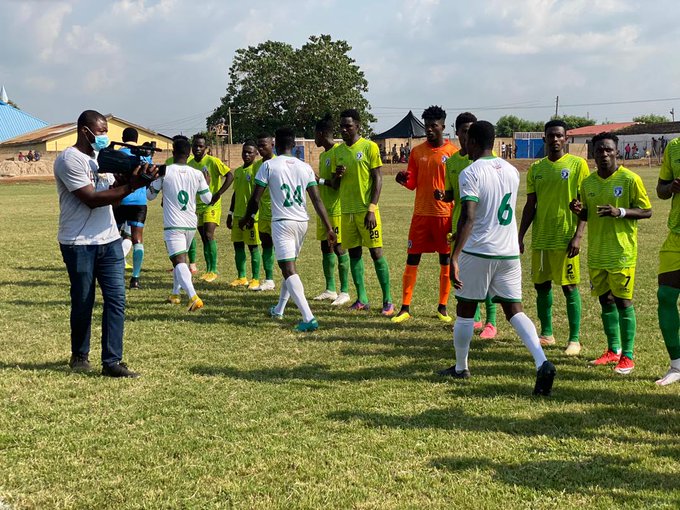 Bechem United settled for a pulsating 1-1 draw against King Faisal on matchday 8 of the Ghana Premier League at the Nana Gyeabour Park.

Moro Salifu gave the home side a deserved lead before the break but second half substitute Kwame Preprah leveled for the visitors.

Bechem United nearly took the lead after three minutes, but Hafiz Konkoni’s strike was blocked by Pius Baffour before young goalkeeper Adams Jabal came to the rescue of King Faisal with a brilliant save from Stephen Owusu’s effort.

King Faisal had their own just minutes later but Wadudu Yakubu missed a golden opportunity to put the visitors in front.

Micheal Amoh and Kwadwo Frimpong combined well from the left but the latter once again missed after his effort went inches following a period of dominance from King Faisal.

Bechem United were awarded a freekick few meters after from the box after Konkoni was fouled but Moro Salifu’s effort was too weak to threaten the visitors.

The Hunters came close through Stephen Owusu before Moro Salifu ensured his side went into the break with the lead after netting with a minute left to half time.

King Faisal immediately brought on Kwame Peprah for Kwadwo Frimpong at half time. Peprah wasted no time in announcing his presence after grabbing a equalizer two minutes after the break.

King Faisal had shouts for penalty waved on after Michael Amoh was brought down in the box.

Stephen Owusu nearly gave the home side the lead but the tireless Pius Baffour was at the right place at the right time to clear.

Kwame Peprah was denied by the woodwork after a brilliant play by King Faisal.

With few minutes left Bechem United kept the pressure on Kong Faisal but the visitors defended gallantly to deny the Hunters.