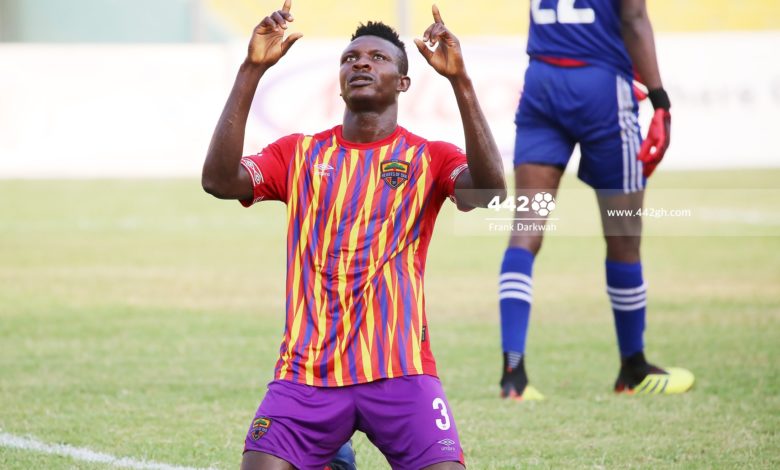 Hearts of Oak returned to winning ways with a hard-fought 3-2 triumph over Ebusua Dwarfs on Matchday 15 of the ongoing Ghana Premier League on Sunday.

Hearts of Oak endured one of the worst moments of the club’s history last week due to the resignation of three technical members of the club.

A run of bad results in the league triggered the current happenings in the club, having collected two points from a possible twelve.

The Phobians however managed to put their acts together for the Week 15 encounter against Ebusua Dwarfs at the Accra aspires Stadium on Sunday.

The hosts started the game in a superb fashion, making incursions in their bid to fetch an early the opener.

Hearts of Oak’s scintillating start to the game saw them create some decent chances.

The Rainbow Club were correctly handed a penalty in the 6th minute by referee Jones Akubiem after goalkeeper Issah Razak brought down Patrick Razak in the box.

Striker Victor Aidoo stepped up to bury the resultant penalty with aplomb.

Hearts of Oak continued to press their opponents. They looked very dangerous anytime they put the ball behind the Dwarfs defense.

In the 18th minute, coach Samuel Noi’s men were awarded another penalty, which again appeared stone-walled after defender Emmanuel Anaful failed to get a touch of the ball as he was being turned inside-out by inspirational Patrick Razak.

Aidoo elected himself again and the towering striker made no mistake by hitting his second of the afternoon with Alan Shearer-like penalty kick.

Dwarfs rescued their disappointing afternoon with a fine exchanges of the ball.

The Crab began to cause problems for the hosts with their improved attacking play.

The visitors deservedly halved the deficit in the 44th minute through Moro Sumaila’s toe poke strike which embarrassingly beat goalkeeper Richard Attah at his near post.

Dwarfs returned from the break much more determined than Phobians.

Nii Ernest Quartey’s charges made several incursions with equalize the goal but were not lucky enough.

Raddy Ovouka had to make a timely clearance on line to deny Dwarfs midfielder Benjamin Acquah from hitting the target.

The Phobians were left light in attack after Patrick Razak was taken off with a gash on his forehead after Dwarfs defender Dennis Akosah’s trailing boot caught his face.

It was not long before Dwarfs got their leveler. Referee awarded Dwarfs a spot kick in the 75th minute despite Larry Sumaila appeared to have gotten the whole circumference of the ball dying his tussle with Acquah in Hearts of Oak box.

Captain Dennis Akosah sent Richard Attah the wrong way as he brought his side back into the game.

The game appeared to be heading to a 2-2 draw before substitute Isaac Mensah scored with a feeble shot in Dwarfs’ box. Goalkeeper Razak didn’t have any idea about the shot as he was caught off-guard.

It was the last action of the afternoon as Hearts of Oak pick their sixth win of the campaign.

Ebusua Dwarfs will have to wait for another season to end their ten-year winless streak against the decorated opponents.

Their last triumph against their opponents came in 2012 courtesy a 3-1 victory at home.

Hearts of Oak have won six (7) straight wins against Dwarfs in the Ghanaian top-flight.