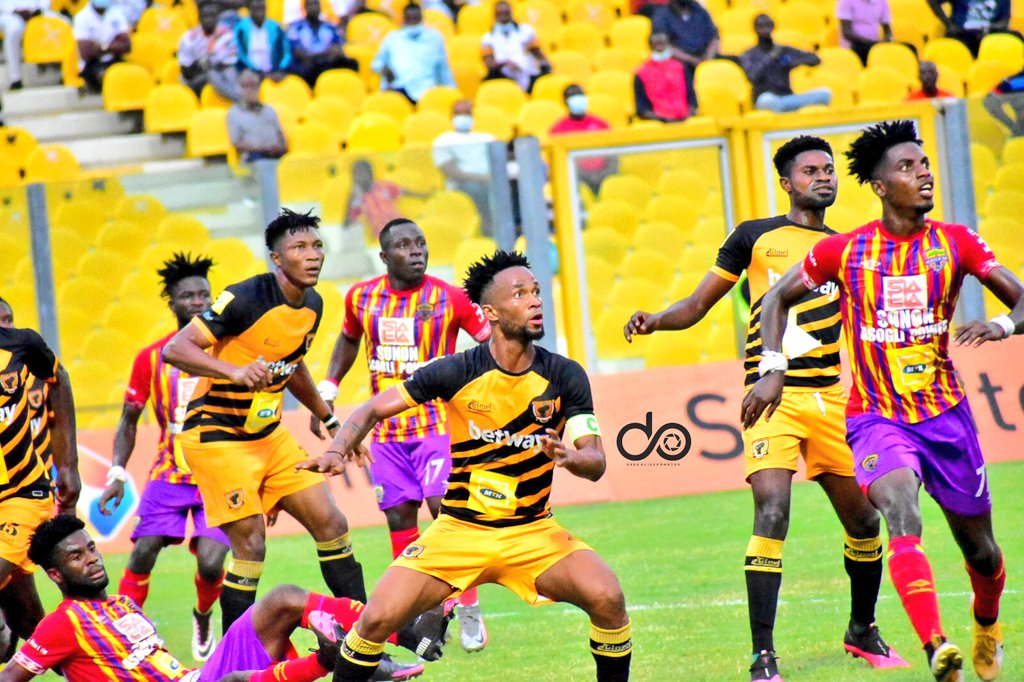 Hearts of Oak completed the double after an 8-7 penalty shootout victory over AshantiGold won them the 2021 2020/21 MTN Ghana FA Cup.

During sudden death of the spot kicks, AshantiGold goalkeeper Kofi Mensah skied his spot kick after his opposite number Richard Attah had scored his.

In the game itself, AshGold's glovesman Mensah was called into action after two minutes and he was up to the task.

He went down early to apply his fist to rolled ball which had set Patrick Razak in motion.

The Obuasi-based side later came into the picture with their first attacking move Mark Agyekum was teed up by Eric Esso but the winger slipped terribly inside the box, allowing Hearts to clear their lines.

Hearts were awarded a free-kick at the edge of the box on 14 minutes after Caleb Amankwah was pushed down recklessly by Stephen Banahene.

Still it was the Phobians in control and Benjamin Afutu delivered a blistering header on a corner kick which came off the crossbar but defender Kwadwo Amoako was close to the goal line to kick it out.

After the break, Hearts continued to press for the opener and in one of those moves, Frederick Ansah Botchway was brought down at the edge of the box.

Raddy Ovouka effected the free-kick but AshGold were up to the task to repel that.

AshantiGold continued to play to their strength and Amos Addai went on a solo run before striking at goal but it was straight and direct for goalkeeper Richard Attah to collect.

Hearts replied with a quick attack but Isaac Mensah was flagged offside inside the AshGold area.

A deflection on an Ovouka shot from long range nearly slipped through the hands of Mensah but he recovered to collect it on the touchline.

Afutu was picked out neatly by a Fatawu Mohammed cross from the right but the midfielder's header at the far post wide.

Seth Osei blasted wide from close range after a goal bound shot was redirected and Isaac Agyemang decided set up the diminutive midfielder.

There was no winner in regulation time after Daniel Barnieh swept his shot at goal wide in the last kick of the match.

In extra-time, Samuel Boadu and his men kept pressing but AshGold were resolute to thwart all their efforts.

Before the end of the first 15 minutes, AshantiGold went on a break with Yaw Annor but his final pass to Osei was flagged offside as the latter was deep in the trap.

Maybe Hearts should have been awarded a penalty when Emmanuel Nettey was fouled inside the box but referee Daniel Laryea thought it was a fair challenge.

Nettey produced an audacious attempt with a long range effort but it was too high to cause havoc.