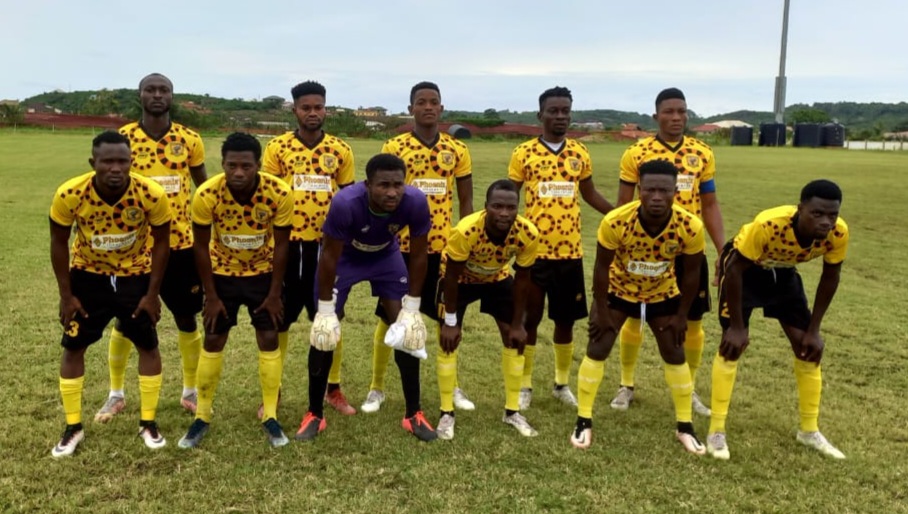 AshantiGold SC defied the odds as they put aside their predicaments to beat bottom placed Elmina Sharks FC in the Ghana Premier League on Sunday afternoon.

The Miners will be demoted to the third-tier of Ghana football after the season as per a decision by the Ghana FA Disciplinary Committee on Monday.

Notwithstanding these challenges, they claimed a deserving 3-1 victory over Sharks at the Nduom Sports Complex.

The Elmina based club can only be safe from relegation if they manage to win all of the remaining games but that seem to be a daunting task.

Sharks assistant coach Bernard Frans who sat in for departed Kobina Amissah made just a single change to the team that held Aduana Stars in the midweek.

Hearts of Oak loanee Michelle Sarpong was brought in the starting lineup in place of Clenn Afful to face the Miners.

Maxwell Adom continue to keep the posts for the "Botwekumba" for his second start of the season. His first was against Aduana last Wednesday.

AshantiGold gaffer Thomas Duah tweaked the squad that started against Medeama SC in the last round with four alterations.

Kwadwo Amoako was handed his first start in the league since March 6, 2022 where he featured against Karela United FC at Nzema-Aiyinase. He replaced suspended Ampem Dacosta.

The visitors took the lead in the match in the 15th minute with a goal from young defender Derrick Atta Afriyie, his very first in the Gold and Black shirt.

AshantiGold scored twice in quick succession in the second half to clinch the victory with goals coming from Ali Mohammed and Yaw Annor in the 70th and 74th minutes respectively.

Annor extended his tally in the season to 17 goals by scoring from the spot.