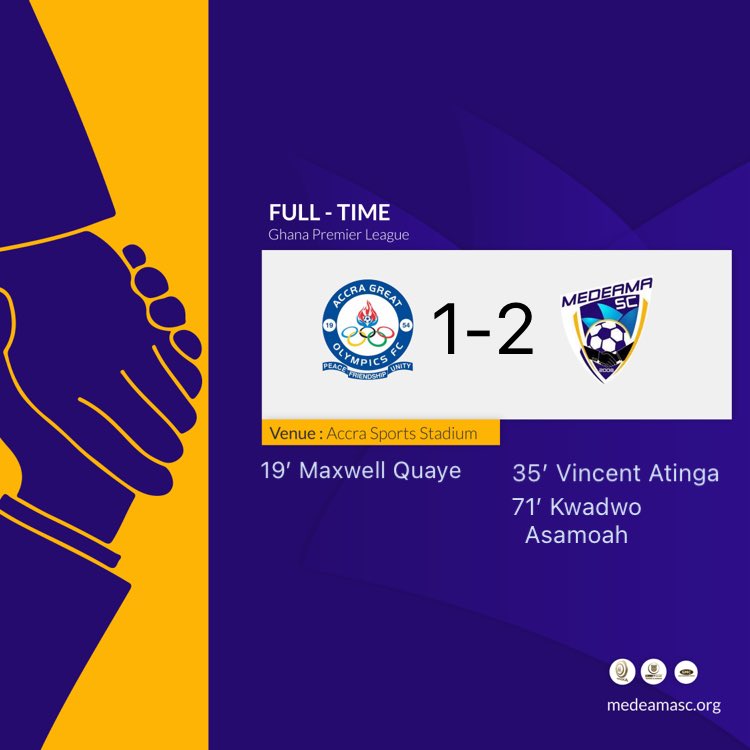 Medeama SC came from behind to beat Great Olympics 2-1 at the Accra Sports Stadium in this week 30 fixture.

The Oly dade boys took the lead in the 19th minute through Maxwell Abbey Quaye.

It was the 10th goal of the season for the Black Stars striker in the ongoing season.

Medeama equalized before the half time break from the penalty spot.

Kwasi Donsu was fouled in the box by Olympics defender Stephen Kweku resulting to the penalty.

Former Hearts of Oak defender Vincent Atinga  h scored his sixth goal of the season from the spot to see the Mauve and Yellow level up.

Stephen Kwaku was later stretched off the pitch due to an injury to the head in the 33rd minute. He was replaced by Seidu Ismalia

Kwadwo Asamoah scored a screamer for Medeama SC in 71st minute to seal the win for the Tarkwa-based side.

Medeama have moved up to the second position after the win and are just six points behind league leaders Asante Kotoko.

The defeat sees Great Olympics drop to the seventh position with 43 points.