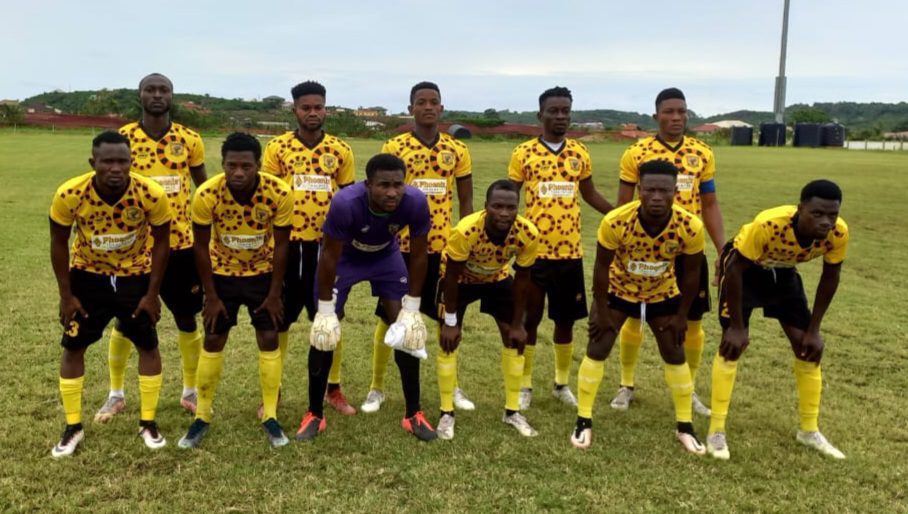 AshantiGold SC put aside their present challenges to see off relegation threatened Elmina Sharks FC with a 3-1 victory last week in the Ghana Premier League.

The Miners had received a verdict from the Ghana Football Association indicating the club will be relegated to the third-tier at the end of the season after being found guilty of match manipulation.

The club's President, CEO, some technical staff members and some players have all been handed bans but they travelled to Elmina to beat Sharks.

AshantiGold will be entertaining Accra Lions FC at the Len Clay Stadium this Sunday in a matchday 31 encounter as they look at moving to the top half on the league standings.

The Obuasi based side are currently sitting at the 10th position with 41 points from 29 matches. They could move to 7th place with a win on Sunday.

The Gold and Black outfit have been lethal at home lately having won all of the last four games at the Len Clay Stadium, scoring 17 goals and conceded just once.

Defender Ampem Dacosta is expected back into the AshantiGold team after serving a suspension in the last game against Sharks.

Lions have been in a good form recently and that's the motivation they are taking to travel from Accra to Obuasi to face AshantiGold on Sunday.

The premiership newcomers are lying at the 12th position on the league log with 40 points, eight more above the relegation zone. They need at least two points to be sure of safety.

Lions are unbeaten in their last three league matches and would want to keep that intact after Sunday's fixture against the Miners. They have also lost just once in their last away games.

They recorded wins on the road over King Faisal Babes in Kumasi and WAFA SC at the Sogakope Park.

Lions midfielder Derrick Nsobila has been rewarded for his outstanding campaign this season with a call-up to the Ghana national team B.

He is expected to put an excellent shift for the Accra based club if they are get a good result on Sunday.