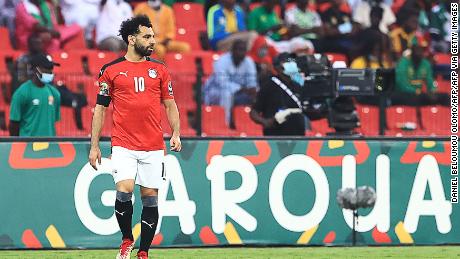 Mohammed Salah after Egypt's defeat to Nigeria at the AFCON
Share

The 2021 Africa Cup of Nations has just stared with the tournament taking place Cameroon between January 9 to February 6.

As ever, plenty of established stars from Europe's top-five leagues will battle it out for the most prominent title in Africa.

With many Premier League players starring in the Cup of Nations, you can expect demand for soccer streams around the tournament to skyrocket.

Here’s a look at the five best players to watch out for in Cameroon.

AC Milan star Franck Kessie is one of the most in-demand midfielders in Europe, with his current contract at the San Siro running out at the end of the season.

The 25-year-old has been an influential figure in Serie A over the past couple of years, earning the reputation as one of the best box-to-box midfielders in Europe's top-five leagues.

With Ivory Coast entering the tournament as one of the leading candidates savour Africa Cup of Nations glory, much will depend on Kessie, who should be his side's driving force in the midfield.

Liverpool and Tottenham Hotspur have laid their eyes on the former Atalanta man, and there is no doubt their scouts will be in Cameroon to keep an eye on the Milan stalwart's performances.

Heavily linked with a high-profile departure from Crystal Palace over the past few years, Wilfried Zaha is still seeking his first piece of silverware since landing the FA Community Shield with Manchester United in 2013.

The highly-rated winger has been nothing short of outstanding in the Premier League since swapping Old Trafford for Selhurst Park in 2015.

But despite his impressive individual showings, the 29-year-old has nothing to show for it as Palace continue to struggle in domestic affairs.

Therefore, Zaha will be looking to shine for Ivory Coast this winter and compensate for a shortage of club success by winning the most coveted international title in Africa.

The illustrious forward could be a key factor as Senegal start the 2021 Africa Cup of Nations as the top favourites to conquer the tournament.

Surrounded by a host of top players, including Napoli's Kalidou Koulibaly, Paris Saint-Germain's Idrissa Gueye and Ismaila Sarr of Watford, Mane must be confident of leading his nation to their first-ever continental triumph.

He has been in stellar form this season and Senegal's hopes of fulfiling their role as tournament favourites will massively rely on his contribution.

Riyad Mahrez might have been in and out of Pep Guardiola's squad this season, but the Manchester City winger remains amongst the elite forwards to feature in the tournament.

Alongside Milan midfielder Ismael Bennacer and West Ham United's Said Benrahma, the left-footed dynamo will be one of Algeria's standout names in Cameroon.

Mahrez has not been at his best at international level of late, but he will hope to find his feet this winter and help his nation become the first team since Egypt in 2008 and 2010 to defend the crown.

The Algeria captain has already demonstrated how talismanic he can be when he is atop his game, and now would be the perfect time for him to hit his stride.

Arguably the most in-form player on the planet at the moment, Mohamed Salah is Egypt's best hope of defying the odds to win the tournament.

The Premier League's highest scorer heads into the 2021 Africa Cup of Nations amid a purple patch after netting 23 goals in 26 competitive matches for Liverpool this season.

Salah won't be lacking motivation as he looks to solidify his status as Africa's best player, having won the African Ballon d'Or award in 2021.

Unlike his Reds teammate Mane, the ex-Chelsea flop won't have a star-studded squad around to help, meaning he is likely to shoulder the burden by himself.