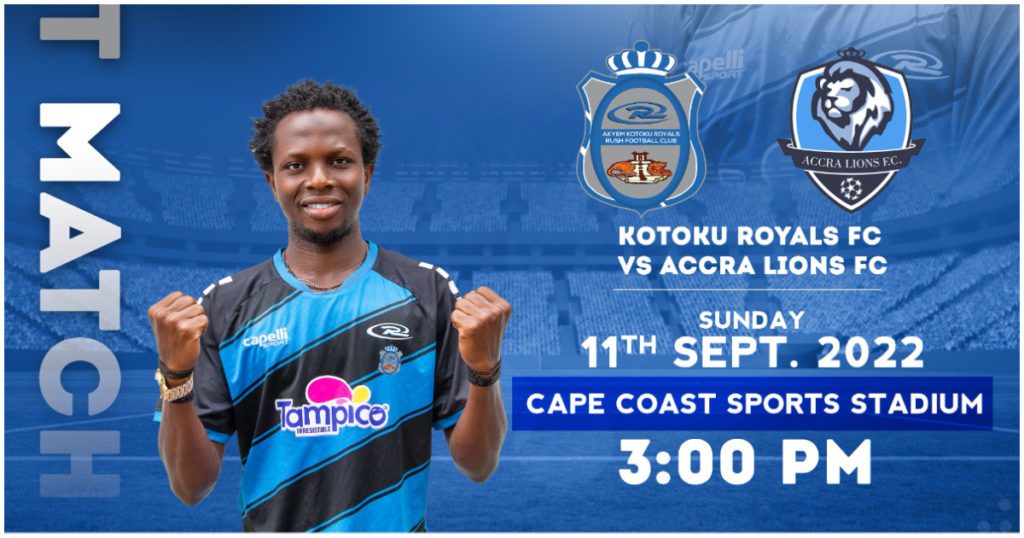 Newly-promoted Ghana Premier League side, Akyem Kotoku Royals, will begin their campaign with a home game against Accra Lions at the Cape Coast Stadium.

The Akyem-based club have to use the Cape Coast stadium as their home venue after the Akyim-Oda Park was deemed unfit to host topflight games.

Kotoku Royals strengthened their technical department after securing promotion to the Ghana Premier League following the appointments of Seth Ablade and Akakpo Partron as head coach and assistant respectively.

The Akyim-based club are aiming at sustaining their topflight status this season and have also improved their squad with the signings of ex-WAFA goalie Ferdinand Sebi, Mohammed Zakari and Godwin,

Meanwhile, after a decent first season in the Ghana Premier League, Accra Lions will be hoping to finish in the upper half of the table.

The Accra-based club were a delight to watch last season, but ahead of the new campaign, several of their key players including midfielder Rashid Abubakar and winger Kelvin Kyei have left the club. Goalkeeper Fredrick Asare joined rivals Asante Kotoko.

However, Accra Lions have bolstered their squad with the additions of Dennis Votere, Youssouf Simpara, Solomon Oppong and Elijah Kwarah.

Captain Dominic Nsobila has also returned from international duty after helping the Black Galaxies qualify for the Championship of African Nations.

Both teams will be hoping to start on a good note but Accra Lions have enough experience to get something on the road.