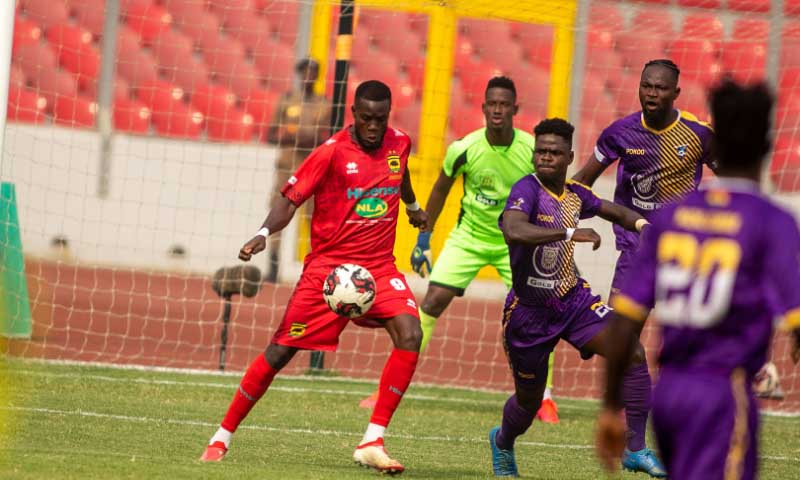 Struggling Medeama host Champions Asante Kotoko in the top-liner of Match Day- 6 of the Ghana Premier League in Tarkwa on Saturday.

The Mauve and Yellow are desperate to turn around their dwindling form after losing three successive matches for the first time in the club's history.

Medeama started the season on a blistering note, winning at Legon Cities and beating Real Tamale United at home.

However, they have lost their last three matches to spark anger and threatens the job of veteran coach David Duncan.

The two-time FA Cup champions are facing the champions in their best unflattering form at the Akoon Community Park, eager to turn things around.

Medeama lost 2-0 at the same venue to the Porcupine Warriors - a defeat which eventually aided the Ghanaian giants the Premier League crown.

Medeama welcome goalkeeper Boris Mandjui Jnr into the squad for the first time in nine months after recovering from an knee injury he picked up backed in March this year.

The return of the exciting Ivorian glovesman is a major boost for the side after Appiah Kubi and Kofi Mensah gifted Aduana Stars and Great Olympics wins with shoddy and poor displays.

Kotoko go into the cracker in buoyant mood and as favourites after recording three wins from five games under coach Seydou Zerbo.

The Porcupine Warriors recovered from their 2-0 defeat at Bechem United to record a comeback 2-1 win over Samartex 1996 in Kumasi last weekend.

The fourth-placed team will hope to repeat last season's performance at the Akoon Park, where they beat Medeama 2-0 for the first time in the mining town.

The Porcupines can move level with Aduana Stars with a victory to boost their hopes of defending the title before the break for the FIFA World Cup.

Meanwhile, David Duncan’s side will aim to bounce back from defeat and close the gap the on the league table, after they were defeated by Great Olympics on Monday.

Kotoko are yet to taste defeat on each of their previous two visits to Tarkwa and will be hoping to extend this record.

Kotoko are without Maxwell Agyemang and Isaac Oppong for the Western showdown.

Zakaria Mumuni returns to the Medeama squad after missing the Great Olympics defeat on Monday.

The top-liner of the week is expected to be an explosive contest between two of the finest clubs in the West African nation.