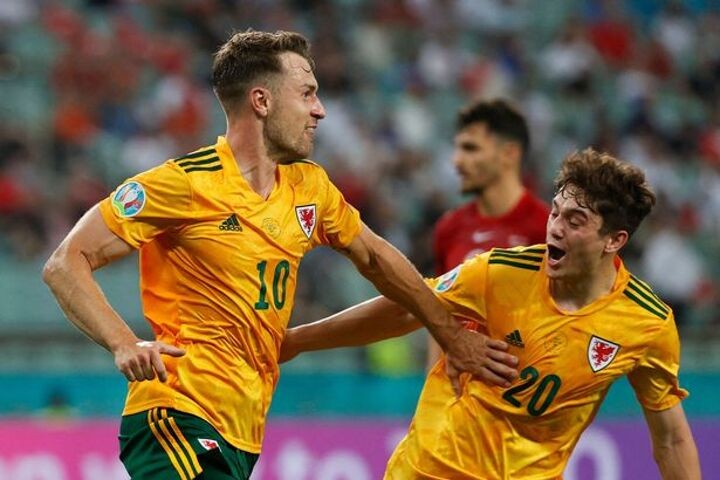 Aaron Ramsey was the star of the show as Wales beat Turkey to take a giant step towards the Euro 2020 knockout stages.

After missing two early chances, Ramsey made no mistake with a brilliant touch and finish from an exquisite Gareth Bale ball to give his side the lead in Baku.

Aside from his goal, Ramsey was a constant threat as well as making some vital defensive interventions as he rolled back the years with a stunning display.

Having failed to feature regularly for Juventus since his 2019 free transfer, Ramsey’s future has been the source of ongoing speculation.

Ramsey recently performed something of a U-turn regarding his future.

Speaking from training camp before the tournament, Ramsey was asked if he would be returning to Turin after the Euros.

“Yeah, I’m a Juventus player,” he replied, appearing to rule out a move.

But in recent days, he admitted he wants “a place where I can feel good again”, seemingly opening the door to a move if the right opportunity presents itself.

“The last two seasons at Juventus have been very difficult, frustrating, not just from a physical point of view. I want a place where I can feel good again,’ said Ramsey.

“There have been many factors and changes that I haven’t been used to.

“So, I take it into my own hands and have the right people around me to try to come up with the best possible plan to get myself back into a place where I am feeling good and confident again.

“The Welsh staff and medical team have been brilliant, they have been open for discussions and it’s important to all be on the same page.

“I have known a lot of the Welsh staff for a long time from my Arsenal days as well. They understand me, they know my body and they know what I need.”

After his display in Baku, Arsenal legend Sol Campbell claimed he “might take a little return to north London” to explore the prospect of a return to the Emirates.

Campbell told talkSPORT: “Aaron Ramsey makes amazing runs. The timings are to perfection, it’s incredible. He’s got a knack of getting in there.

“Turkey were playing three at the back, so Ramsey was just waiting for that gap and [Gareth] Bale found him for the first goal. He’s very intelligent with those runs.

“He might take a little return to north London and see what’s happening at Arsenal – you never know.”

Ramsey already knows manager Mikel Arteta well from his time as a team-mate at Arsenal.

When the Spaniard got the top job, Ramsey took to social media to comment on his confidence that Artete would be a “top manager”.

"Always knew Mikel would go on to be a top manager,” Ramsey wrote. “Good luck my friend but I'm sure you won't need it!"

After mixed fortunes so far at Arsenal, and with a need to bolster his attacking options from midfield, Arteta could well explore the prospect of bringing Ramsey’s experience back into the fold.

His Baku masterclass certainly proved he has plenty left to offer and could well be an option Arsenal should consider.