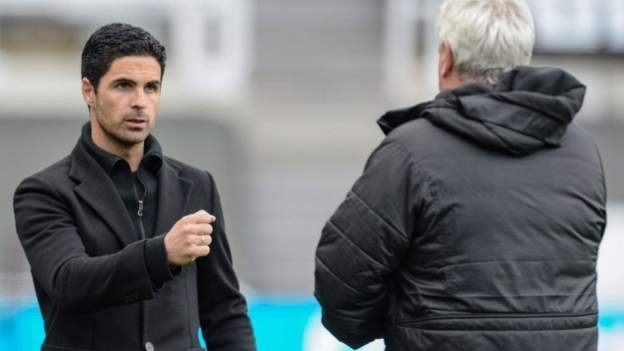 Steve Bruce was sacked by Newcastle on Wednesday

Arsenal boss Mikel Arteta says managers are being put off taking jobs because of the sort of abuse suffered by Steve Bruce at Newcastle.

Bruce left the club on Wednesday and, in an interview with the Telegraph,external-link detailed the strain put on him and his family during his two-year tenure.

Arteta says current and prospective coaches have told him they are thinking twice about becoming managers.

"Yes, a lot of people think like that," he said.

Arteta, 39, added: "I heard a lot and I have a lot of friends who are doing the courses, who doubted whether they want to take the hot seat or whether it is better to be an assistant or something else.

"For me, this cannot be the barrier, because you have fear about the treatment you are going to receive. I think the enjoyment as well is that big, that it should not stop you.

"But it is important that we take care a little bit of the environment and putting things in the right place. If not, I don't think it will get better. I think it will get worse if we don't do anything about it."

Bruce's final game at Newcastle, a 3-2 defeat by Tottenham on Sunday, was his 1,000th as a manager, but the 60-year-old says that could be his last job.

Arteta, who is at the other end of his managerial career, was asked whether prospective coaches have called him personally with their concerns.

"Yes," he said. "And people who have been managers already, experienced managers, and they are thinking about not doing it again.

"You cannot lose the focus, the passion and the love - the reason why you made the decision in the first place to do that.

"If you are affected by every single opinion in life nowadays, with how easy you can read stuff about yourself, you are not going to be happy with whatever you do."

Arteta says bosses have to deal with criticism but, after Bruce said he was called "useless, a fat waste of space, a stupid, tactically-inept cabbage-head", improvements must be made.

"I was really sad after reading that statement from Steve," said the Spaniard. "First of all, because I know him personally, and secondly, because of what he transmitted in his words.

"You're talking about somebody who has been in the game for over 40 years as a player and as a manager.

"I think we have to reflect. We can't take for granted and accept certain things because they are how they are."