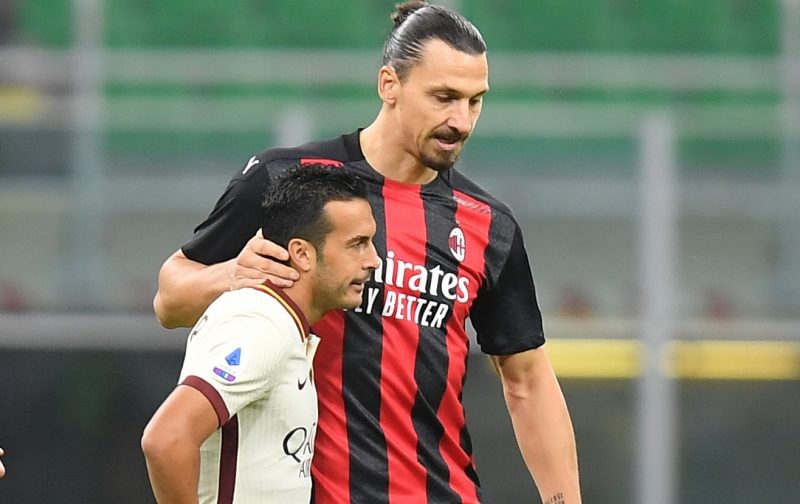 AC Milan dropped their first points of the season in a 3-3 draw with Roma, as they were pegged back on three separate occasions at the Stadio San Siro on Monday night.

The pendulum swung between the two sides with Milan going back in front via Alexis Saelemaekers, then Jordan Veretout levelled from the penalty spot.

It looked as if Ibrahimovic had bagged all three points with a spot kick of his own, but Marash Kumbulla equalised for the third time in the game.

Milan have how scored two or more goals in 11 consecutive games for the first time since 1959, and remain first in Serie A, two points ahead of Napoli. Roma meanwhile, sit level with Hellas Verona in eighth place. Less than two minutes player and Milan had themselves in front when Ibrahimovic got on the end of a brilliant pass by Rafael Leao and slotted past Antonio Mirante.

Roma responded well and Dzeko then equalised when Ciprian Tatarusanu rushed out for a corner and missed the ball completely, which allowed it to fall perfectly on the head of the Bosnian, who nodded into an empty net.

Milan went closest in the remainder of the half when Simon Kjaer headed onto the the post from a corner, and Hakan Calhanoglu put a freekick just wide.

Moments into the second half Leao was again instrumental as Milan retook the lead. The Portuguese sailed down the right side and his low cutback to Saelemaekers allowed the Belgian to lash into the net. Roma could have equalled when Henrikh Mkhitaryan swung in a brilliant ball to the back post, with Dzeko waiting, but he could only side-foot over the crossbar.

Mkhitaryan had a chance which was saved low by Tatarusanu, but he was unable to control the ball and Ismael Bennacer tripped Pedro has he rushed in to nick the ball. Referee Piero Giacomelli pointed to the spot and Veretout stepped up to slam the ball past the Romanian.

The game then swung back in the direction of Milan when Gianluca Mancini appeared to kick Calhanoglu in the penalty area as he went for the ball, but the penalty was awarded. Ibrahimovic stepped up and slotted home. Roma were down but not out, as Ibrahimovic flicked on a Giallorossi corner unwittingly and the unmarked Kumbulla rushed on and levelled for the away side once again.

Mirante was the saviour for Roma as he beat a Franck Kessie header off the line in the closing stages with Milan going agonisingly close from a corner. Then Alessio Romagnoli head a header inches wide in the last action of the match.