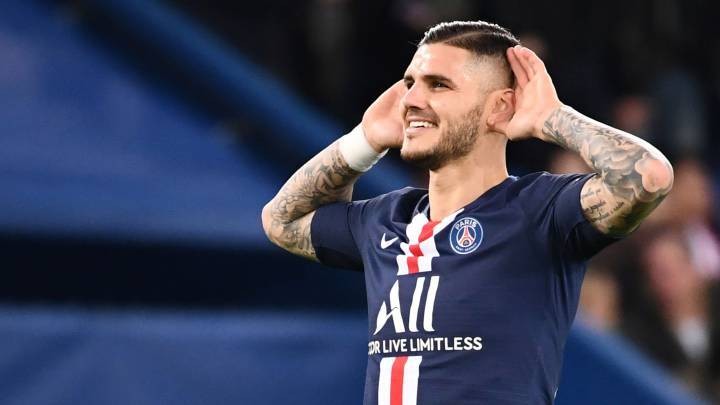 According to reports in Italy, AC Milan are considering a January move for former Inter Milan striker Mauro Icardi to complement Zlatan Ibrahimovic.

Former Inter Milan striker Mauro Icardi could be set for a dramatic return to Serie A with cross-city rivals AC Milan if the current Serie A leaders have their way in the January transfer market. The Milan board have identified the PSG striker as the perfect foil for Zlatan Ibrahimovic – and the perfect replacement for the veteran Swede when he eventually calls it a day – and are plotting a bid to lure Icardi back to Italy.

The Argentinean made his loan deal at the Parc des Princes permanent at the end of last season for a fee of €50m after a fine season in Paris that reaped 20 goals from 34 appearances. So far in 2020-21 Icardi has found the net twice in four Ligue 1 games after recovering from covid-19 but has been sidelined with a knee injury since the beginning of October.

Milan have shot to the top of Serie A with a game in hand over their rivals with Ibrahimovic in timeless form, scoring four times in the two games he has been available after also being sidelined with a case of covid-19. Having set a target of Champions League qualification at the start of the season, Milan are now eyeing greater glory with a first Scudetto since 2010-11. Ibrahimovic has admitted it is early days but Milan snapped up plenty of exciting talent in the summer to complement the existing squad and now see Icardi as the missing piece of the puzzle.

Icardi and Ibrahimovic would be a potent strike force and the Milan board are conscious of the fact that when PSG have a fully fit squad the Argentinean will find it hard to break up a front line of Kylian Mbappé, Neymar and Ángel di María. Edinson Cavani’s departure has freed up some space but Thomas Tuchel was reluctant to play four forwards too often last season, preferring a little more security in midfield, and PSG also added Moise Kean as well as former youth team strikers Arnaud Kalimuendo and Alexandre Fressange as more willing options from the bench.

Milan believe a guaranteed starting role plus the benefit of returning to his former home could be enough to tempt Icardi, who did not leave Inter on the best of terms, back to Serie A.