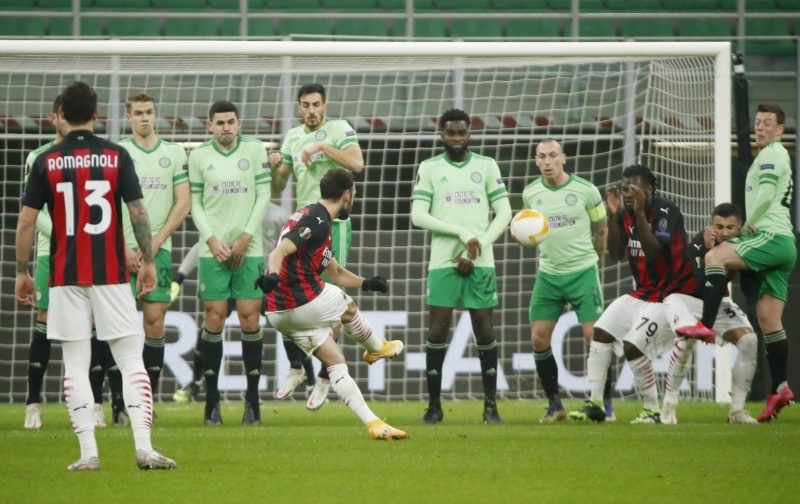 AC Milan secured their passage into the Round of 32 of the Europa League with a come-from-behind 4-2 victory over Celtic at the Stadio San Siro on Thursday.

The Rossoneri trailed to early goals from Tom Rogic and Odsonne Edouard but fought back superbly to draw level before the break, courtesy of Hakan Calhanoglu’s freekick and a Samu Castillejo strike.

After the break victory was sealed through the individual brilliance of Jens Petter Hauge as the Norwegian waltzed his way through the defence to score a fine goal, before teeing up Brahim Diaz late on to send Milan through. It is proving to be a thoroughly enjoyable season for those of a Rossonero persuasion, as Milan sit unbeaten at the top of Serie A and have qualified from the Group Stage of the Europa League with a match to spare.

Milan’s domestic dominance and sterling comeback against Celtic is proof that they can consider themselves amongst the heavyweights in the competition and favourites to lift the trophy.

Few teams will relish heading to the San Siro and Milan’s form and strength in depth make them a real player in the Europa League. How much focus they can afford to give it should they be in the thick of a Scudetto race remains to be seen, but this season is a fine chance to bring some European glory back to the club.

For just €5 million, winger Hauge is looking like an increasingly astute piece of business for Milan and the Norwegian made his mark against Celtic with a magnificent display, culminating in a goal and an assist.

The 21-year-old caught the eye for Bodo/Glimt during a preliminary qualification tie against Milan this term, prompting the Rossoneri to swoop for him, and his displays since suggest they have a gem on their hands.

With 20 dribbles and 26 positive passes, Hauge was on the front foot and caused Celtic’s backline no end of trouble, particularly as he cut inside to skip through a crowd of bodies into the box. A fine performance was worthy of a fine goal, and his individual effort was no less than he deserved.

The post AC Milan stake claim as one of the Europa League favourites first appeared on Forza Italian Football.