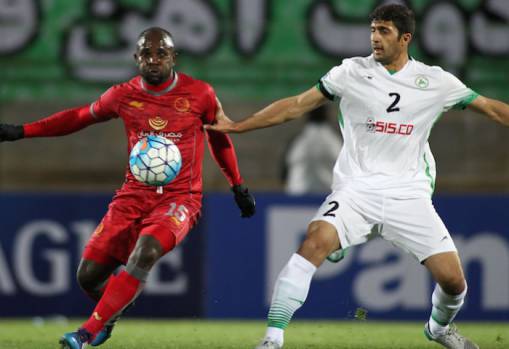 Isfahan: Qatar Stars League champions Lekhwiya picked up their first point of the 2016 AFC Champions League campaign as Djamal Belmadi’s side secured a 0-0 draw with Iran’s Zobahan in Group B on Tuesday.

Zobahan had won last week’s meeting between the two teams thanks to a solitary goal by Mehdi Rajabzadeh, but Belmadi’s side held fast at the Foolad Shahr Stadium to claim their first point of this year’s continental campaign.

The home side were on the front foot from the first whistle and, with less than two minutes on the clock, Lekhwiya goalkeeper Ivan Rodrigues was forced to dive at full stretch to push Kaveh Rezaei’s shot to safety after the Iranians hit quickly on the break.

And, just four minutes later, Golmohammadi’s side went closer still as Ali Hamam’s header came back off the cross bar before being hacked to safety.

Lekhwiya took time to find their rhythm, with Alain Dioko going closest for the visitors when his shot on the turn from outside the area was saved by Mohammadrashid Mazaheri.

With seconds remaining in the half, Nam Tae-hee should have done better with his effort when he had the time and space to pick his spot after Luiz Junior’s tricky run down the right saw him leave two defenders on the floor only for the South Korean to shoot high over the bar after a perfect lay off.

Ten minutes after the restart, it was Lekhwiya who again looked the most likely to open the scoring as Yousef Msakni surged towards the Zobahan defence before setting up Ismail Mohamad, but his effort from inside the are was hopelessly off target.

A minute later, Zobahan came within inches of opening the scoring as Rezaei outpaced Rodrigues to the ball on the edge of the Qatari side’s area but, with his weak effort rolling ever closer to the line, Chico Flores was just quick enough to sprint back and clear to safety.

At the other end, Nam tried his luck again, this time with a low side-footed effort from the edge of the area that curled away from Mazaheri’s goal.

With 11 minutes to go, Morteza Tabrizi was presented with the best chance of the game when he found himself with him and space in the penalty area to pick his spot, only to panic and send his attempt high and wide of the target.