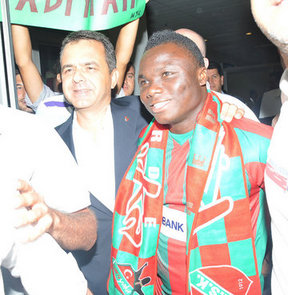 Dominic Adiyiahâ€™s agent has slammed the strikerâ€™s decision to sign for a second division team in Turkey, saying the loan deal is 'five steps back' in his career.

The 22-year-old signed a one-year bumper loan deal on Thrusday from AC Milan to join Karsiyaka on the orders of the Italian side.

The former U20 World Player of the Year signed the deal despite his agent Goran Milovanvicâ€™s advice against the move.

The agent says Adiyiah decision to play in the second division of could harm in progress.

â€œI wish to state categorically that Dominic Adiyiah signed for the Turkish second division club Karsiyaka without my knowledge and consent,â€ Milovanovic said in a statement.

â€œIn fact when this offer was brought before us last week, I warned Adiyiah against the move as I believe, he should be playing among the best in Europe.

â€œSurprisingly, he chose to travel to Turkey to sign the deal which has left me in shock as we were negotiating a move for him in the top league in Germany or France.

â€œI have always fought for the best opportunities for Dominic but it is sad that at this key moment of his life, he took this move.

â€œFor a player who won the World Youth Best Player award just two years ago, I believe the move to the lower division in Turkey can negatively affect his progress.

â€œWith no disrespect to Karsiyaka and the Turkish second division, Adiyiah has taken five steps back in his career with this move.

â€œI pray he makes the most of this pathetic situation,â€ the statement concluded.

The move marks a dramatic drop in fortunes for the attacker who was wanted by several top-flight clubs in Europe.

AC Milan managing director Adriano Galliano forced through the deal for the Ghanaian to play for the club owned by his friend Nazim Torbaoglu.

Hundreds ofÂ supportersÂ of the club met the former world youth best player at the Adnan Mederes Airport in Izmir onÂ Tuesday on hearingÂ that they were about to make their biggest ever signing.