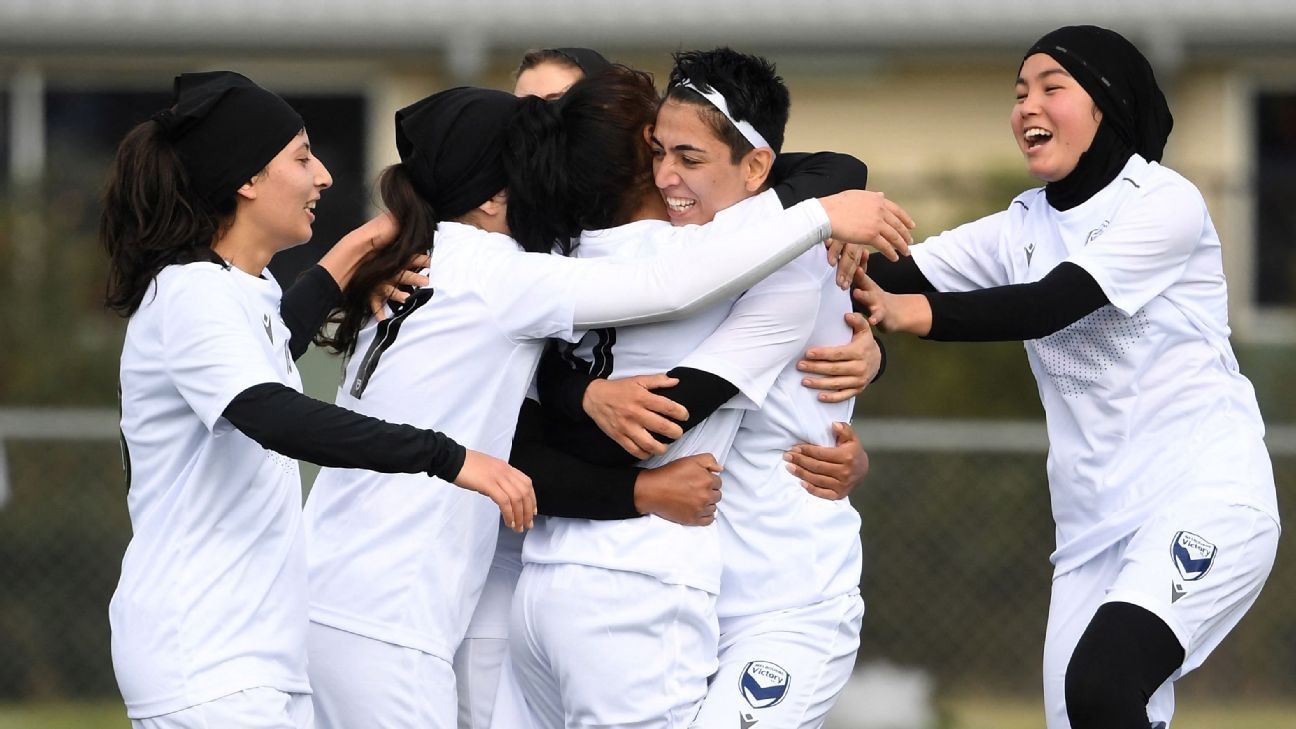 AUSTRALIA -- Eight months after being forced to flee for their lives as the Taliban seized control of their homeland, the Afghanistan women's national team marked another monumental step in their journey on Sunday, officially returning to competitive football.

On a small pitch at Delahey Reserve, half an hour's drive west of Melbourne, Australia, the national team in exile took to the field for the first game of Victoria's 2022 State League 4 campaign, playing out a scoreless 90 minutes against ETA Buffalo.

"It feels so good. We played again as a team. Together," Murfal* told ESPN. "That's the best part, that we have each other and we're again together. That's a good thing for all of us.

"The result is not important, actually, because we have each other. It's such a happy occasion for us."

Murfal and her teammates' journey to this point is, unfortunately, well known. The group were among the hundreds of sportswomen forced to flee Afghanistan as the Taliban seized control of the country in August 2021, their status as female athletes putting them in danger of persecution and possible reprisal from the insurgent group.

After frantic efforts to secure their evacuation to Australia, the team, with the encouragement of former captain Khalida Popal, made the decision to stay together as a unit upon their arrival in their new homeland. In doing so, they hope to mount a case to FIFA, national federations and governments that they should still be recognised as representatives of Afghanistan and able to represent them on the world stage.

What this actual process of recognition and elevation to international football remains unclear but under the banner of Melbourne Victory FC AWT -- the A-League club is supplying full operational, administrative and coaching support for the squad -- Sunday represented an important step from both a practical and figurative sense.

"It's always a throwaway line to talk about how organisations are purpose-driven and that sort of stuff but this really is. It's been a touching day," Melbourne Victory director of football John Didulica told ESPN.

"To see them play with such heart, commitment, and endeavour was just beautiful, it really was."

Serendipitously, AWT's first opponents in Australia have their own legacy of seeking sanctuary: ETA Buffalo founded by East Timorese asylum seekers that settled in Melbourne's west during the 1980s.

"It's fitting. Their journey, their story is very similar to our story and our journey," Buffalo president Jose Leong told ESPN. "Our club started back in 1982 by a group of young refugees. So it's perfectly fitting that we're the ones to welcome them."

For all its symbolic import, however, Sunday's proceedings hardly would have merited a second glance from an unaware bystander; a canteen in operation, dogs meandering about on and off lead, and younger members of the crowd ambling off to entertain themselves. And while we clearly won't be seeing the Afghan women's team taking it up to the likes of the Matildas or USWNT any time soon, it was entertaining football, as well.

Desperate defending from hosting Buffalo saw an Afghan women's team effort cleared off the line in the early stages. On the sideline, the younger members of the squad, still waiting for international clearance from FIFA, yelled in frustration, kicked the turf, and encouraged their teammates onward. It's hoped that their clearances will arrive in time for the team's first home game this weekend.

Members of the Melbourne Victory FC AWT carry the Afghanistan flag before their match against ETA Buffalo. WILLIAM WEST/AFP

Up the other end, defender Shamsia* was forced to intervene on several occasions as the Buffalos pushed forward and goalkeeper Fatima* was called into action to make a number of saves. But after her side absorbed a period of pressure to finish strongly, Manizha* had a shot clatter off the crossbar in the second half before Manozh's* desperate follow-up header flashed just wide.

Manozh then had the ball in the back of the net minutes later, only for the jubilant celebrations that broke out to be cut short by the referee signalling the goal was to be disallowed for offside.

Soon after, the contest ended 0-0 and despite the obvious triumph the mere act of taking the field represented, the team's coach, A-League Women championship-winning coach Jeff Hopkins, had to remind the team to keep smiles on their faces. The Afghan women's team is grateful that they are together and still playing. But they also want to win. And they'll be given the tools they need to do so.

"What we wanted to do was have a look at the game [today] and look at a few areas that we need to work on and improve on," Hopkins said.

"From what I saw today, and the mentality of the group, they want to take this very seriously."