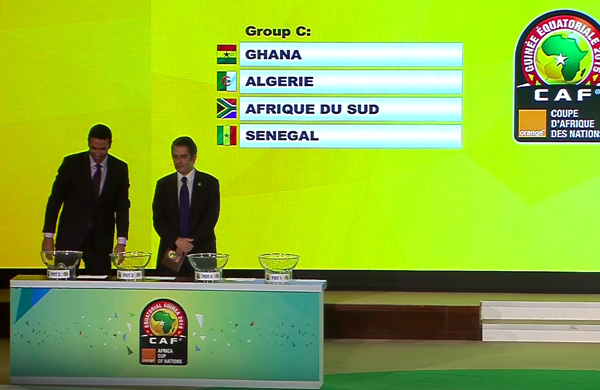 Given the seeding pots, the potential for an atrociously difficult group at next monthâ€™s Africa Cup of Nations was always there. The draw delivered, spectacularly and brutally.

Algeria, the top-ranked team in Africa,Â the only one of the Cup of Nations qualifiers to reach the last 16 of the World Cup, were the danger lurking in Pot 2 and Ghana the unlucky seeds.

But worse than that, Ghana had already been grouped with Senegal â€“ by some distance the best team in Pot 4 â€“ and, from Pot 3, the side that eliminated the champions Nigeria in qualifying, South Africa, resurgent under Shakes Mashaba.

If one of the aims of this tournament was to direct the attention to Mongomo, the home town of the Equatoguinean president, Obiang Nguema, the draw could hardly have worked out better.

There have been clear efforts over the past few years to raise the profile of the town onEquatorial Guineaâ€™s eastern border with Gabon. In 2009, for instance, a huge basilica, 200m long, was built, while there is a modern five-star hotel that, until now, had been in search of a purpose.

It will presumably host all four of the teams in Group C.

For Avram Grant, confirmed as Ghanaâ€™s coach on Wednesday, this is a major test. He is already without Kwadwoh Asamoah because of injury and, given Ghanaâ€™s recent habit of sleep-walking through Cups of Nations, there is a major danger they will fail to reach the last 16.

Algeria lost Vahid Halilhodzic after the World Cup, but they have maintained their momentum under Christian Gourcuff.

The winger Yacine Brahimi, of Porto, was named theÂ African Player of the YearÂ this week and they won five out of five in qualifying before going down to Mali in their final game.

In terms of Premier League interest, Tottenhamâ€™s Nabil Bentaleb is almost certain to be in the squad, while Newcastleâ€™s Mehdi Abeid could also be called up. Had the tournament been in Morocco as was originally intended, Algeria would almost certainly have been favourites; as it is, the only doubts arise from the fact that Egypt are the only north-African side ever to have won the tournament outside of north Africa.

Â For South Africa, too, this is a major test. Under Mashaba they had at last started to look as though they could return to somewhere near the top of the African game and they fully deserved to top their qualifying group. The murder of the goalkeeper Senzo Meyiwa, though, has overshadowed all else.

Senegal, meanwhile, have as fine a crop of forwards as anybody: their issue is how to fit as many as possible into the squad while retaining some kind of balance. As well as Moussa Sow and Dame Nâ€™Doye, there is the Premier League quartet of Papiss CissÃ©, Mame Biram Diouf, Sadio ManÃ© and Diafra Sakho. West Ham will have particular reason to hope Senegal are knocked out early, with Cheikhou KoyatÃ© also in the squad, along with Hullâ€™s former West Ham midfielder Mohamed DiamÃ©.

In an extremely lop-sided tournament, qualification from Group C will mean a quarter-final against a side form Group D, the second strongest group. Ivory Coast are past their best but are still good enough to win the tournament. With Didier Drogba retired â€“ although HervÃ© Renard has made clear he would welcome him back, Yaya TourÃ© becomes the undisputed central figure. His brother, Kolo, is the only other Premier League player guaranteed to be in the squad, although Cheik TiotÃ© may be called up.

Mali, still led by Seydou Keita, will be doughty as ever; Cameroon, seemingly relieved to be rid of the turbulent presence of Samuel Etoâ€™o, breezed through qualifying after an awful World Cup, while Guinea are the romantic hope, having qualified despite having to play their home games in Casablanca because of the Ebola crisis.

The other two groups are far simpler. The tournament will begin in Bata on 17 January with the meeting of Equatorial Guinea and Congo; the latter under the management of Claude Le Roy, at his eighth Cup of Nations with his fifth different team. With Gabon heavily reliant on Pierre-Emerick Aubameyang, that leaves Burkina Faso, finalists two years ago, as the favourite to top Group A. Jonathan Pitroipa has been in fine form recently, but their great strength is the defensive resolve instilled by the controversial Belgian coach Paul Put.

Zambia, riding high in the rankings thanks to their success in Libreville three years ago, are the seeds in Group B, but Emmanuel Mayuka could face an early return to Southampton from a group that is intriguing if not of top quality. Crystal Palaceâ€™s Yannick Bolasie, of the Democratic Republic of Congo, is the other main Premier League interest. Congo qualified as the best third-placed side and, while the draw could have been much tougher, they are likely to be eliminated. Tunisia are solid and effective, while Cape Verde, having come so close to World Cup qualification, could reach the quarter-finals for the second tournament running.

In the first round, though, most of the focus â€“ particularly that of Premier League fans wanting their players home early â€“ will be on Mongomo and Group C.