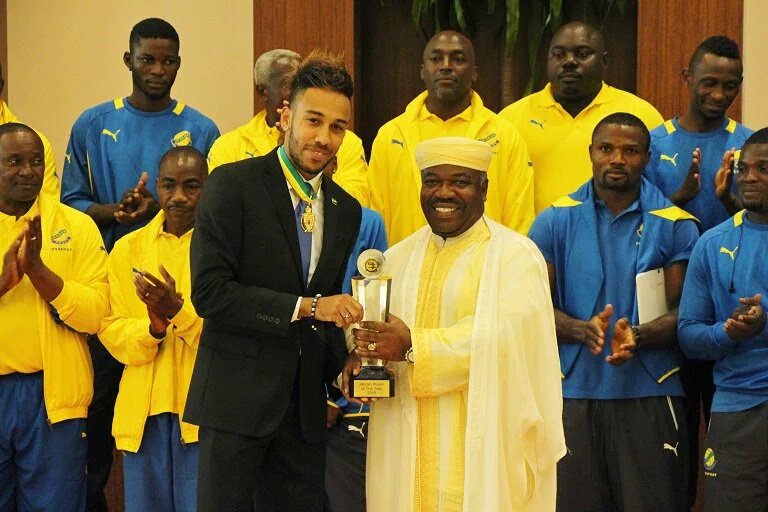 Pierre-Emerick Aubameyang, the newly-crowned African Player of the Year, received a hero's homecoming on Friday where he was hailed by thousands of fans as the pride of Gabon.

The 26-year-old Borussia Dortmund star pipped four-time winner Yaya Toure of Manchester City and Ivory Coast to win the prestigious award, an achievement which had fans dreaming of Africa Cup of Nations success on home soil in 2017.

"He has risen through the ranks and this is a just reward," said Brice Ignegue, the president of the Panthers' (the national team's nickname) fan club.

Sabrina, a young fan who came out to greet Aubameyang, said the player was a national hero.

"Aubameyang represents Gabon, he is the national panther. He is the pride of Gabon and Africa," she said.

Gabon president Ali Bongo Ondimba posted photos of the player's arrival on his Twitter account as he welcomed his compatriot to the presidential palace.

The president immediately conferred upon Aubameyang one of the country's leading civil honours, Commander of the National Order of Merit.

"I am happy and proud with this honour that I dedicate to the people of Gabon, my family and you, Mr President," said the Dortmund star.

Aubameyang then was feted by thousands of fans who packed the Nzeng Ayong stadium where he showed off the player of the year trophy.

"Now we expect him to win the Africa Cup of Nations for us in 2017 just like Yaya Toure did with Ivory Coast," said Achilles, a local student.