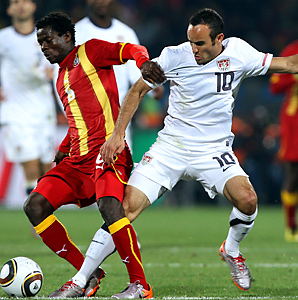 Ghana midfielder Anthony Annan will not be joining Manchester United this season and other clubs interested have not tabled an offer, his agent has confirmed.

The Norway-based enforcer expressed his surprise last week when Ghanasoccernet revealed that his club Rosenborg were not keen on selling him to the English giants.

And now his agent Lars Petter Fosdahl has confirmed that proposed move to Manchester United has fallen through.

The Rosenborg midfielder attracted interest from some of the biggest clubs in Europe after starring for Ghana at the World Cup.

United were thought to be leading a host of clubs - including Chelsea, Arsenal and Lyon â€“ in the race for the playerâ€™s signature.

Sir Alex Ferguson expressed an interest in signing the Â£8 million-rated Annan, who has been likened to Claude Makelele because of his style of play and has made it clear he wants to leave Rosenborg.

Ferguson is thought to be in the market for an all-action defensive midfielder because of continuing concerns over Owen Hargreavesâ€™s troublesome knee and Annan seemed to fit the bill.

But the Red Devils have decided against making a bid this summer, leaving the 24-year-oldâ€™s future up in the air.

Annan remains optimistic of a move to the Premier League but his Norwegian club do not want to sell the player, whose contract expires in December 2011.

â€œThat possibility is over. I can categorically tell you we are not talking to them about a transfer.

â€œThere are many other big clubs in England and in Europe interested in him but at the moment nothing is happening.

â€œRosenborg donâ€™t want to sell him but we are still hopeful he will be allowed to move before the end of the window.â€

Annan is one of the hottest properties in Europe at the moment after he played a key role as Ghana reached the quarter-finals of the World Cup in South Africa.

But his chances of a money-spinning transfer have been further damaged by his appearances in Rosenborgâ€™s Champions League qualifiers, which means he will be cup-tied in Europeâ€™s elite competition should he complete a move.

Fosdahl added: â€œA big problem for clubs trying to sign him now is that he has played in Champions League qualification and they donâ€™t want to sign a player who will be cup-tied.â€

Annan has been at Rosenborg since August 2008, when he joined from IK Start in a Â£1.2m deal.