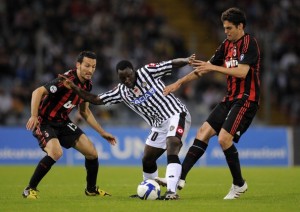 The agent of Ghanaâ€™s potential world class player Kwadwo Asamoah says Italian clubs are too poor to sign him, insisting that England is the Ghanaianâ€™s next destination.

Claudio Vagheggi has revealed that theÂ Â midfielder has attracted a large number of suitors this season and could take a starring role in the upcoming transfer window.

Asamoah has also earned widespread plaudits this season and is said to be on theÂ Fiorentina and Napoli shopping lists, but Vagheggi claims that Italian clubs might beÂ priced outÂ of any potential deal.

â€œHe is young and could spend another season in Udine,â€ Vagheggi explained.

â€œI have talked toÂ Fiorentina, but his fee is way out of the Violaâ€™s spending bracket and maybe also of that of most of Italian sides.

â€œSo, his future will probably lie in England.â€

Arsenal are one of the clubs keen on signing Asamoah for next season.