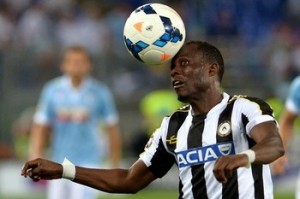 Emmanuel Agyemang-Badu has rubbished reports that Liverpool have have made an offer to sign him from Italian side Udinese but the Ghana midfielder admits that he will jump at the chance of playing for the English giants.

The 23-year-old, who is regarded as one of Ghana's tough midfielders, was rumoured in the Italian media of being one of the key players targeted by Liverpool for a swoop this month.

Some reports even suggested that Liverpool have already made an offer to sign him but the Ghanaian insists the reports are just rumours.

"I have not heard anything from my agent - at the moment it is all speculation," he told Goal.

"We will have to see what happens in the next two weeks because it has always been my dream to play in England.

"We played against Liverpool in the Europa League last year so I know all about them.

"They are a really good team who have been performing well this season and I would be very happy to join them.

"Iâ€™m settled in Italy but the chance to play for such a big club is something I couldnâ€™t pass up."

A move to Liverpool will massively boost the career of the midfielder who is keen on playing in the English Premier League.