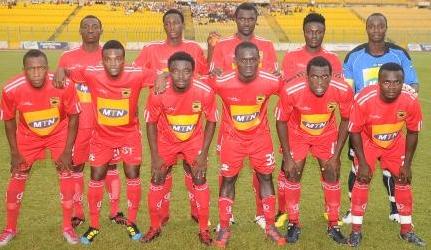 Kotoko went into the match as over-whelming favourites and responded after 37 minutes when striker Nathaniel Asamoah opened the scoring.

The quicksilver forward flicked a ball over goalkeeper Ransford Kudjoe after the Bechem defenders failed to clear a ball inside their area.

Kotoko looked to be on top but the Bechem midfielders turned on their competitive switch and began to cease control.

The second half began with Bechem slightly on top and were gifted the lead after the hour mark through Akwasi Adu.

Experienced striker Ofori Quaye began a counter attack and teed up Eric Fordjour who released Adu to fire home and put them 2-1 up.

Five minutes later, the goalscorer limped off and was replaced by Richard Afriyie.

That sparked their revival and Kotoko equalized through Ahmed Toure on 71 minutes from a resultant corner-kick.

Nii Adjei's kick was met by Nathaniel Asamoah's head which hit the cross -bar. The ball fell to Toure who connected with his right foot.

The tempo of the game was at a diminuendo before Toure struck again with a quarter of an hour left on the clock.

Nat Asamoah set up the reigning Ghana Premier League Most Valuable Player who unleashed a pile driver with his left foot.

His strike was enough and sealed the points for Kotoko who moved to the summit of the league log.