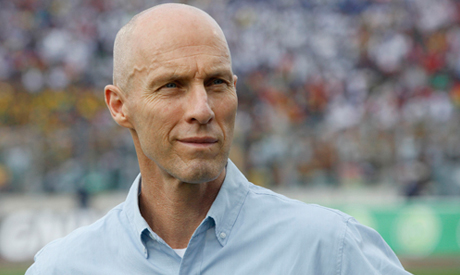 "Bradley is committed to the team and will not flee from his duties after the heavy defeat," Abdel-Fattah was quoted as saying.

The Pharaohs, who are bidding for their first qualification ticket to the World Cup since 1990, were handed a 6-1 defeat Tuesday by Ghana in the first leg of the African playoff.

The humiliating result triggered intense deliberation around the 56-year-old tactician inside the Egyptian Football Association (EFA), one month ahead of the decisive second leg scheduled for 19 November in Cairo.

"I am against sacking Bradley because it would cost Egypt three million Egyptian pounds as a buy-out clause," Sports Minister Taher Abu Zeid said in a television interview Saturday night.

According to his assistant, the former US coach met his players after the defeat and demanded of them to "get a better image in the second leg."

The holders of seven African Cups of Nations have gained the full mark in the qualifiers winning a maximum 16 points to lead group G.

"The team won three times home and another three away, but the Ghana match missed the technical managing," the minister added.

The 6-1 defeat attracted strong popular and media attention in Egypt during the Eid Al-Adha holidays, while the country remains in turmoil since the 3 July military ouster of president Mohamed Morsi amid mass protest against his one-year rule.

Next month's game is also important in terms of security, as the North African country has already cancelled two successive premier leagues due to fan-related issues and banned fans from attending continental competition games.