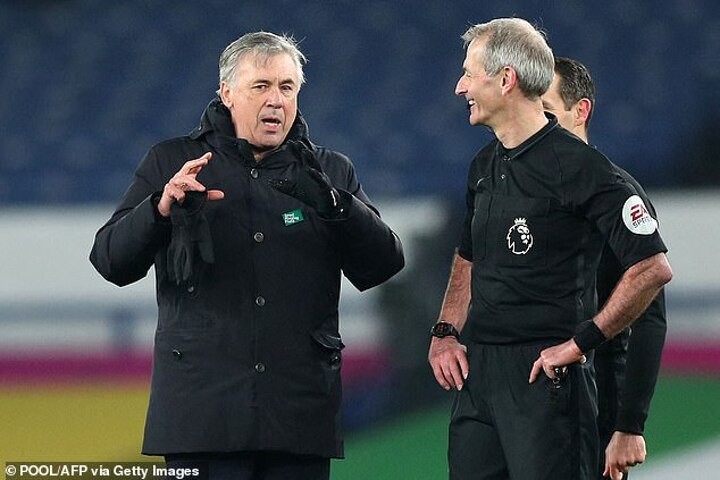 Everton manager Carlo Ancelotti believes getting into the top four this week could be psychologically important for his players and said qualifying for the Champions League would be a 'dream'.

The 1-0 win over Southampton, courtesy of Richarlison's third league goal in as many games inside the first 10 minutes, moved his side within two points of fourth-placed West Ham with a match in hand.

They could go move above the Hammers on Thursday with a win at struggling West Brom, with rivals Liverpool hosting Chelsea at Anfield later in the evening.

He told Sky Sports: 'To fight for European places we need to improve the home run, this performance and victory can help us have a better run at home.

'It will be a dream to be in the top four at the end of the season. We are quite close, if we win Thursday, but the decision is long - we have to stay in our goal which is to play Europa next season.'

'I think we have a great opportunity for one day, two days, three days, to be in the top four and we would like to touch the position,' said Ancelotti.

Ancelotti has now turned his attention to the clash against West Brom, which he believes is a good opportunity for his side to take another three points.

He said: 'We have to put all our thoughts for the game on Thursday to try to be there. I don't know how long (but) it is how we feel when we are there.

'I think it is an opportunity to be there, we can win and be in the top four.

'I think there will be a big fight until the end of the season, until the last game and we have to be pleased we can fight for that position - but this doesn't change our target and that is to be in Europe next season.'

Richarlison has now scored five goals in as many games in all competitions after being told by Ancelotti he had to work harder.

His manager does not believe his current run should be seen as anything special though.

'He has answered my call, this is true,' he added.

'What can I say, Richarlison is not doing something extraordinary, in my opinion he is doing his job.

'He is a player with this kind of quality. I hope and I am sure he is going to continue.'