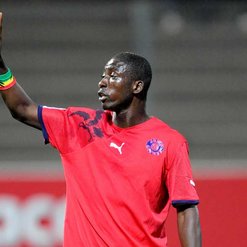 Jomo Cosmos defender Ofosu Appiah is hoping the side can overcome their defensive frailties when they travel to Orlando Pirates on Monday evening.

Ezenkosi have spent the majority of the current campaign staring relegation squarely in the face, with Jomo Sono's men only able to record two victories in their opening 22 encounters.

Their most recent outing saw Cosmos concede a 1-0 lead against Ajax Cape Town to eventually succumb in the final eights minutes as the Urban Warriors bounced back to record a 2-1 victory.

The Johannesburg-based outfit , now seven points from safety, take on the title hopeful Buccaneers at Orlando Stadium next week, and Appiah knows his side can ill afford to produce the same defensive displays against the defending champions.

"We tend to lack focus at crucial moments and our penchant for defending too deeply after scoring has become a major worry," the Ghanaian told the club's official website.

"In other words, for us to survive this season and retain our PSL status we need to be focused, stop making silly mistakes and attack relentlessly instead of defending."

Cosmos' fate will be decided over the next few matches, and the no-nonsense centre back is hoping his side can rise to the challenges that awaits them.

"With only eight matches to the end of the season it is time for us to stand up and be counted. We cannot go on like this hoping to get divine favours," he added.

"We must work hard to achieve our objective of staying back in the Premiership, and that begins with our next game."