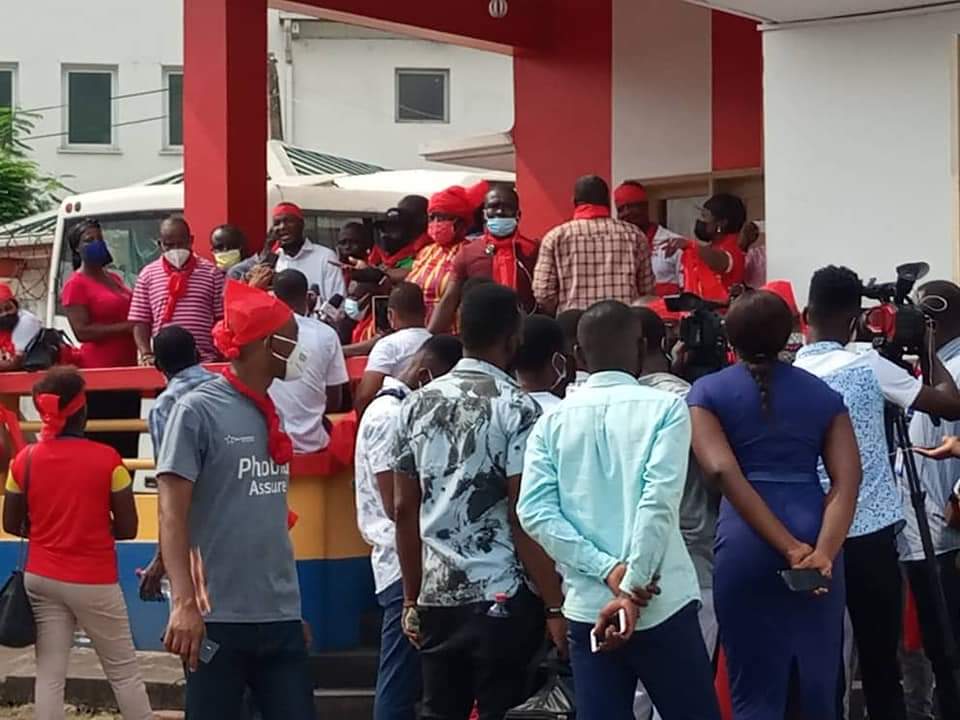 The crisis in Hearts of Oak deepended on Wednesday morning when angry supporters of Ghanaian giants stormed the club's headquarters before warning the bungling Togbe Afede board not to appoint a foreign coach in the wake mass resignations at the struggling side.

The official supporters body of the club, the NCC, clad in red to demonstrate their intense anger over the disastrous decsions by the board over past ten years, stopped workers at the club from performing their duties before addressing the media.

The Supporters Group of Hearts of Oak has made some huge demands to the Board over the appointment of a local coach.

The National Chapters Committee held a press briefing at the club's secretariat on Tuesday on the recent happenings in the club.

The press briefing led by the Supporters Chief Elvis Herman Hesse saw the group demanding the appointment of a local coach.

According to Elvis Herman Hesse, the Supporters will not tolerate and accept should the Board appoint another expatriate coach to head the club's technical team.

Speaking at the press briefing held at the club's secretariat on Wednesday, the Supporters Chief made certain demands on behalf of the Supporters.

"The NCC demands the immediate appointment of a first-team coach".

"This should be done in consultation with all the stakeholders. We have realized that the expatriate coaches have not helped the clubs for the past decade.

"We will not hesitate to take an action when an expatriate coach is appointed. The NCC wants to be involved in who becomes the next Chief Executive Officer and a local coach".

The Ghanaian giants over the past few days have been hit with a series of resignations which has led to serious agitations from the supporters.

The NCC demands for the following with immediate effect:

1. The NCC is calling for the immediate reconstitution of the Club's Board of Directors to make accommodation for stakeholders and Minority shareholders and holding of the long overdue Annual General meeting of the Club.

2. The NCC demands an emergency meeting with the majority shareholders for briefs on the current state and happenings in the Club

3.The NCC demands immediate consensus stakeholder meeting between the majority/Minority (Shareholders) on one hand, and other key organs of the Club in order to Foster lasting Unity for the Club.

4. The NCC demands an immediate appointment of a CEO/First Team Local Coach and this must be done in consultation with all stakeholders of the Club to energise support base of the Club.

The supporters have locked the club secretariat and will not allow any staff entry until 2:00pm.