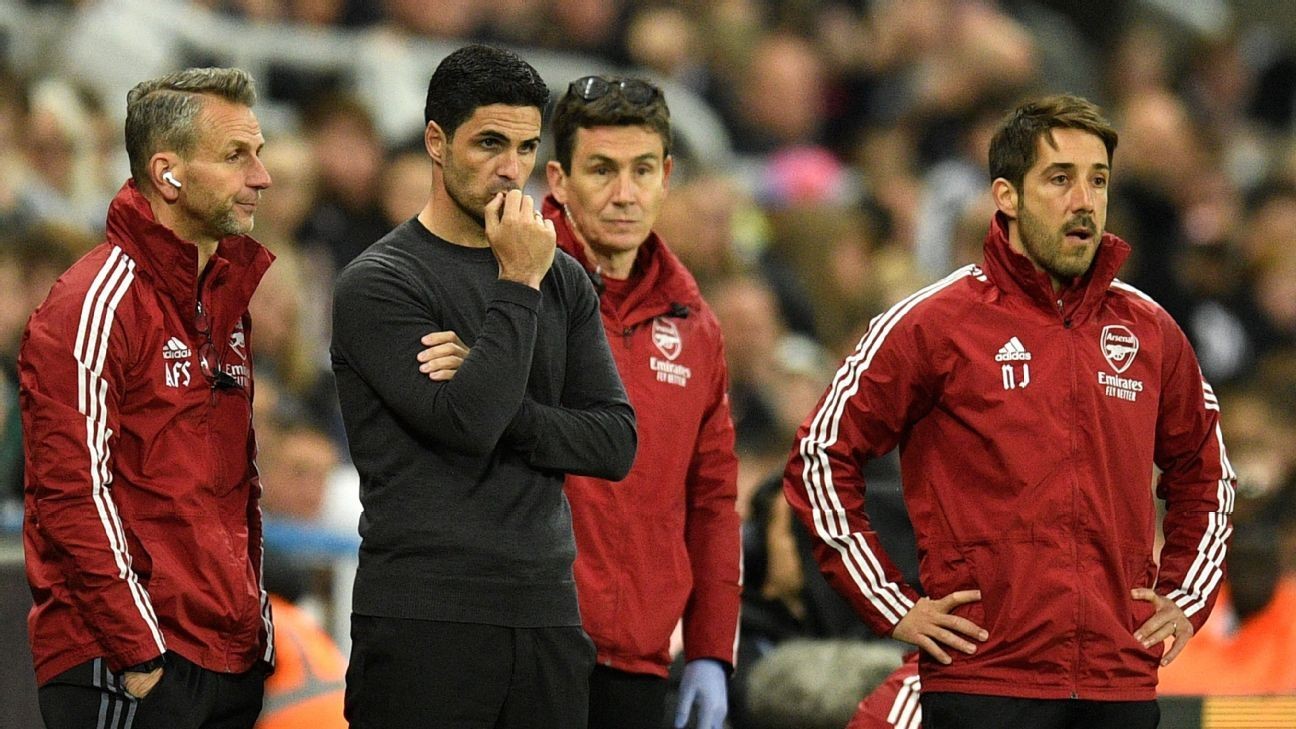 NEWCASTLE-UPON-TYNE, England -- Arsenal have blown two opportunities in the space of four days to take control of their Champions League destiny and they only have themselves to blame for the fact that they are now relying on relegated Norwich to throw them an unlikely lifeline in their losing battle to return to club football's biggest competition.

Having lost 3-0 to Tottenham last Thursday, Arsenal knew that a win at Newcastle on Monday would take them back into the top four and ensure they started the final weekend of the season with a one-point advantage over Spurs in the race for the final Champions League qualification spot.

But this Arsenal team is neither resilient nor reliable, and the only positive from their 2-0 defeat at St. James' Park was that the final score line was not more reflective of the home side's dominance.

Where would Man United be without Ronaldo? How he saved a grim season from total meltdown5hMark OgdenUK gov't approval has Chelsea sale in limbo1hAssociated PressSources: Arsenal set to sign striker Marquinhos2dJames Olley

Arsenal were so bad, so passive, that manager Mikel Arteta said Newcastle were "100 times better in every department." Midfielder Granit Xhaka went even further by hinting at a weak mentality among his teammates.

"People speak always about leaders," Xhaka said. "We're not playing tennis, we're playing football. If someone is not ready for this pressure, stay at home. You can't come here and play like this.

"They (Newcastle) were running us over from the first minute to the 96th. When you play like this you don't deserve to play in the Champions League."

While Xhaka had a point, he was as big a culprit as those he was criticising. The Switzerland international is experienced enough to lead this team on the pitch, but he was nowhere to be seen when Newcastle were winning every challenge, so Xhaka's words ring fairly hollow, unless he is blaming himself too.

And so, having been a win away from sealing Champions League qualification against Spurs last week, Arsenal now need to beat Everton at the Emirates on Sunday and hope that Norwich, the Premier League's bottom team, beat Antonio Conte's side at Carrow Road.

If that happens, Arsenal will be the luckiest team on the planet, but they don't deserve any fortune or favours after their embarrassing failure to get the job done themselves.

Arsenal manager Mikel Arteta looks on with his coaching staff during a 2-0 loss to Newcastle United at St. James Park on May 16, 2022. Oli Scarff/AFP via Getty Images

Make no mistake, Arsenal are heading for the Europa League and the ramifications of their late season choke could have major implications at the Emirates.

Champions League qualification, for the first time in five years, would be worth at least £70 million to Arsenal. A run into the knockout stages could see them earn close to £100 million.

That kind of financial uplift would give Arsenal the chance to compete with the leading clubs in the transfer market this summer and ensure that emerging stars such as Bukayo Saka and Gabriel Martinelli had no reason to consider a move elsewhere.

But without Champions League football, nothing can be certain at the Emirates. The Europa League is not only a sub-standard competition in relation to the Champions League -- one which does not appeal to the best players -- it also delivers nothing like the finances of UEFA's senior competition.

When Chelsea beat Arsenal to win the Europa League in Baku in 2019 -- the last season unaffected by the COVID-19 pandemic -- they banked just £39 million from winning the competition, so the difference between the two tournaments is huge.

But it cannot all be about money and finances. Arsenal did not perform so poorly against Newcastle because of money.

Arteta's players simply lacked desire and hunger. Newcastle, with nothing to play for, performed like a team that had everything on the line.

It was a similar story in the defeat at Tottenham when the home side outfought Arsenal. Even though Arteta has made progress in changing the attitude at the Emirates, old habits die hard and Arsenal still lack tenacity when they need to fight their way to a win.

Aside from Saka, who is still only 20, Arsenal lack a player who can be relied upon to measure up when faced with a challenge. That lack of leadership permeates through the team and results in all of the players looking and waiting for somebody else to step up.

But the only players stepping up in this game were wearing black and white shirts. A Ben White own goal and a Bruno Guimaraes strike were enough to seal the 2-0 home win, but it could have been more for Newcastle.

That's down to Arsenal, though. With the prize of Champions League football within their grasp, they have failed to seize the initiative and their recurring nightmare goes on.

"I am incredibly disappointed," Arteta said. "It's a very painful one. It was in our hands and today it's not in our hands. We have to beat Everton and wait for Norwich to beat Spurs, but there's always a tiny chance in football."