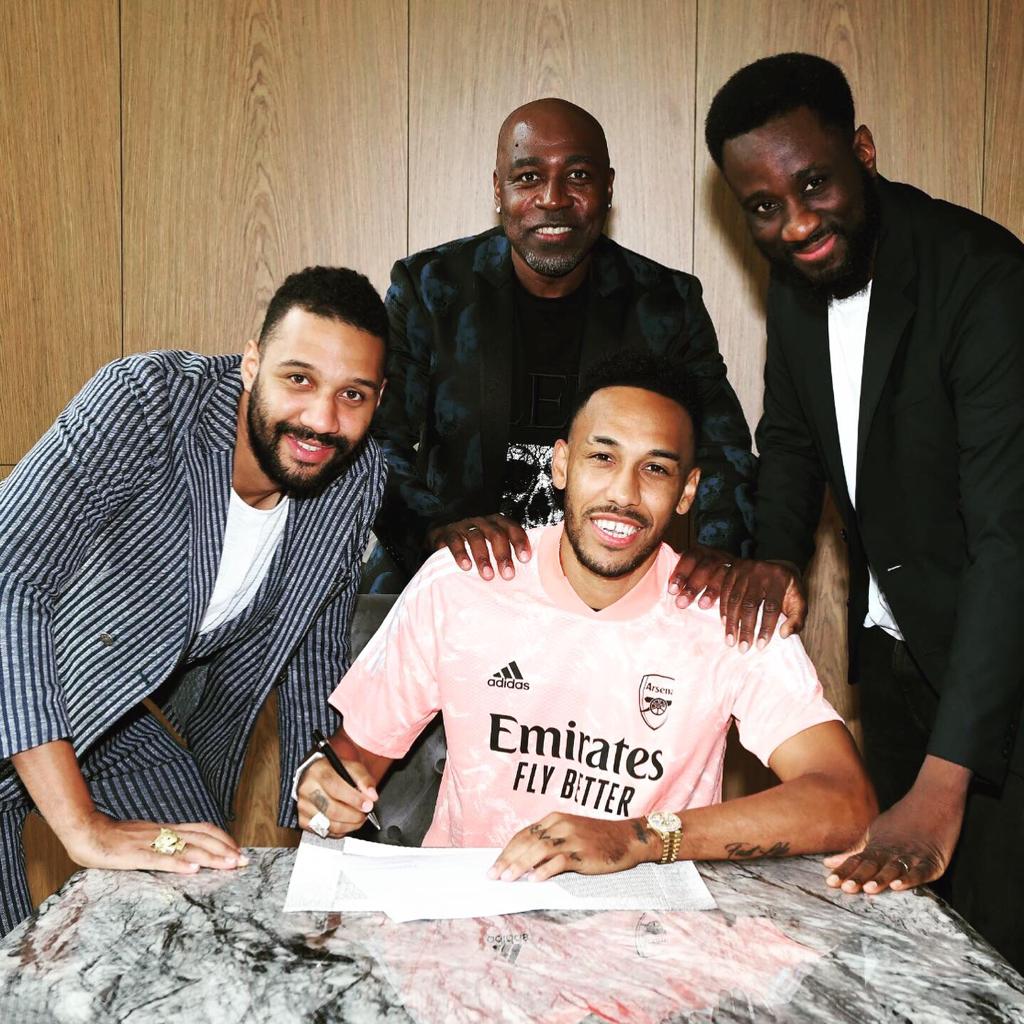 Arsenal superstar striker Pierre-Emerick Aubameyang shook Ghana last week when he revealed that he has strong family roots in Ghana.

Now his extensive connection to the West African country has been discovered establishing that he is not only connected to the country but one of the key members of his close knit football business associates is from Ghana.

The Gabon international, like his friends keep a lot of the things secret away from the gaze of the public but the latest revelation shows he has got more affection for Ghana.

Kwaku Mensah, an astute football agent operating in the UK and highly connected in Europe, was instrumental in Aubameyang extending his contract with Arsenal make his the Premier League's highest earner. 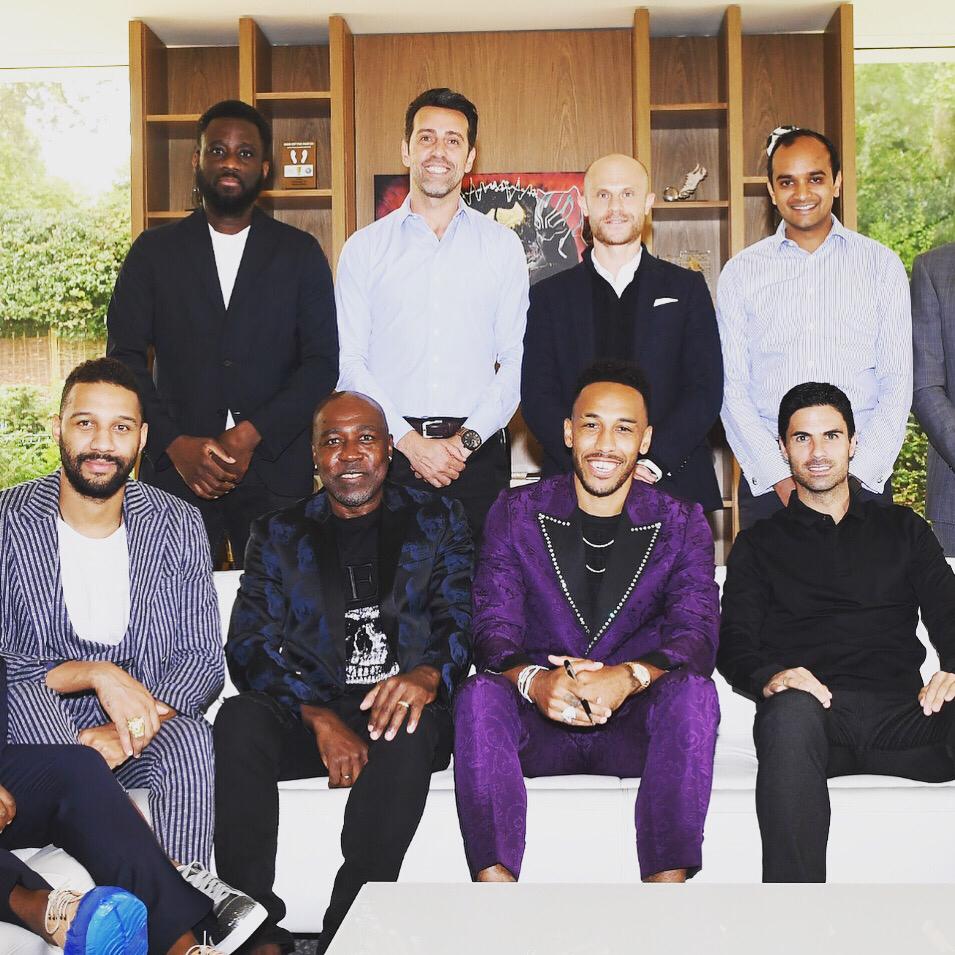 Aubameyang together with his dad and brother as well as Kwaku Mensah (first left) with Arsenal coach after extension deal was sealed
The deal that also made the striker the highest earning African footballer ever was brokered along with Aubameyang's father, Pierre-François and the striker's brother. Behind the scenes smoothing the deal was Mensah who is very well know in the Ghana football circles.

As the Director of the London-based football management firm Premier Sports Talent, Mensah has placed several Ghanaian, African and black players in the UK with clubs in the English Premier League as well as some of the other top leagues. 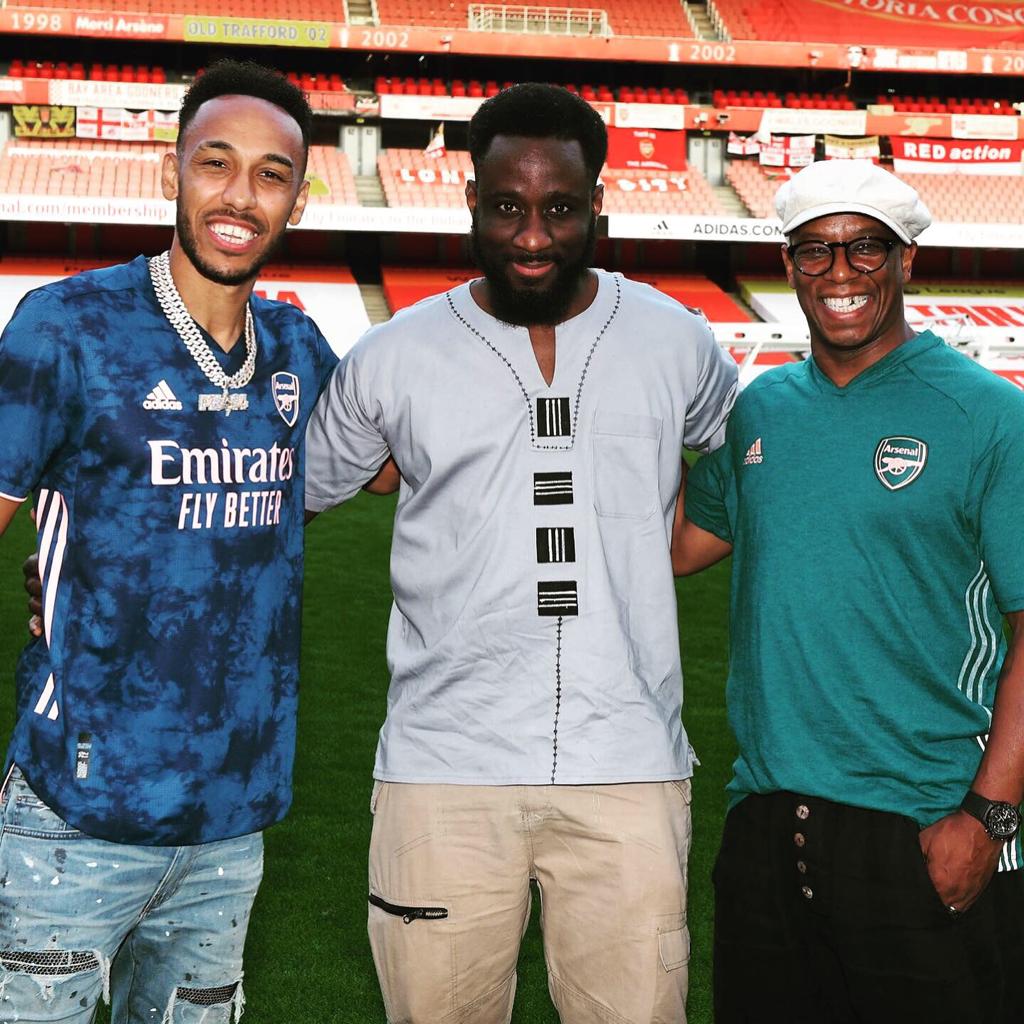 Aubameyang together with Kwaku Mensah (middle) with Arsenal legend Ian Wright
A cursory glance on his social media pages exposes the relationship has with Aubameyang and other top players of the continent. And at a time that African sportsmen are fronting the BlackLivesMatter campaign, the British-Ghanaian is also making sure it counts in the business aspect of the sport.

But with Aubameyang now keen to show his affinity with Ghana following the arrival of Partey at Arsenal it is clear he has more Ghanaians to count on.

Aubameyang has finally revealed the long-hidden secret that he has strong family roots in Ghana - news that will surely delight many Ghanaians.

The Gabon international forward made the revelation during a press conference last week when asked about how his Ghanaian team-mate Thomas Partey was settling in at the North London club.

When you finally get to catch up with your bros, just to do the “Rona elbow” 🤣🤣🤣 #fofty #brothers #africanboys #elbow #aubameyang and #aubamebloodclaatyang #arsenal #afc #fofty #premierleague #facup #topscorer #africanfootball #auba #afc #coyg #soccer #fifa

The 31-year-old did not state how he is related to the West African country but Ghana's leading football news outfit Ghanasoccernet.com can exclusively reveal that his paternal grandmother is Ghanaian.

Aubameyang's father, Pierre-François - a former Gabon international midfielder - was born in the Gabonese city of Bitam to a Ghanaian mother and a Gabonese father.

This means the Arsenal striker's grandmother comes from the West African country and revealed in true nature of Ghanaians that he is family with the new Arsenal midfielder Thomas Partey.

"My family is from Gabon but I also have some roots in Ghana where Thomas is from so we are family too!'" Aubameyang said in a press conference on Friday when asked about Partey.

"It is good for some of our younger players as well to have a player like him, of his calibre at training. They will learn a lot from him." 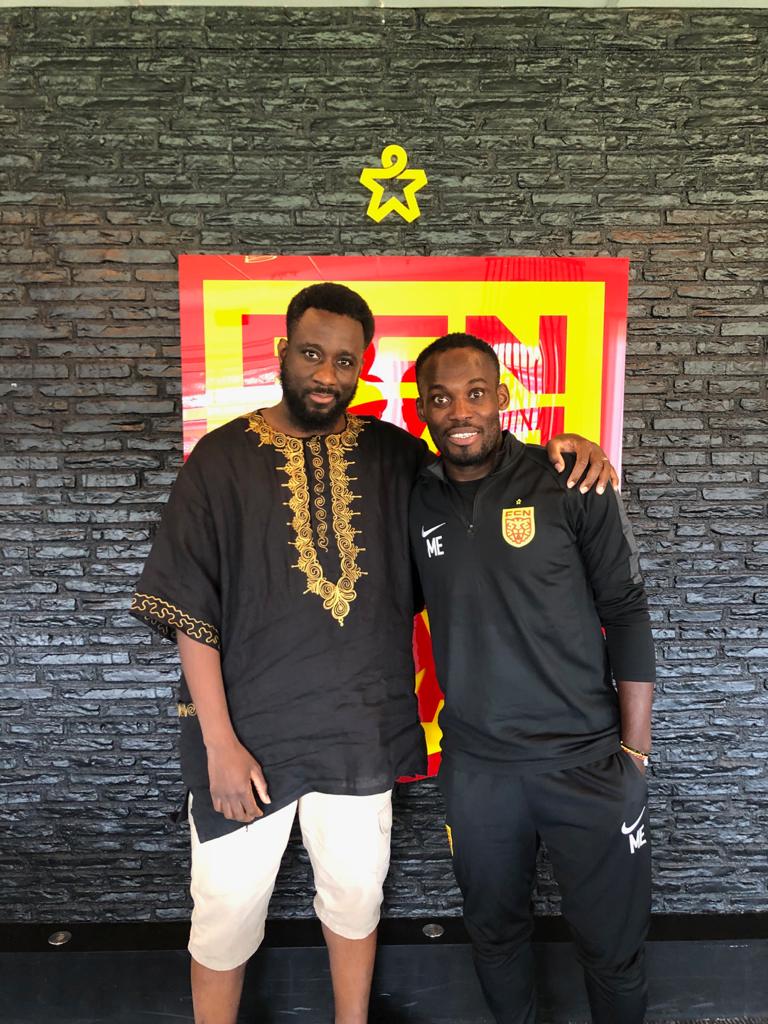 Kwaku Mensah was with Michael Essien when he signed his deal with Nordsjaelland
The revelation will definitely blow up Arsenal striker Aubameyang's followership and fanbase in Ghana even though he is already highly popular in the West African country thanks to his talents.

Aubameyang's father spent most of his career at French clubs Stade Lavallois and Le Havre. At international level, he won 80 caps for the Gabon national team.

He went on to coach the national team of Gabon before focusing on developing the talents of his son after playing for many years in Gabon.

His son who currently plays with Partey will also spend some time with the Ghanaian midfielder to enhance his knowledge about Ghana and re-connect with his extended family in Ghana.