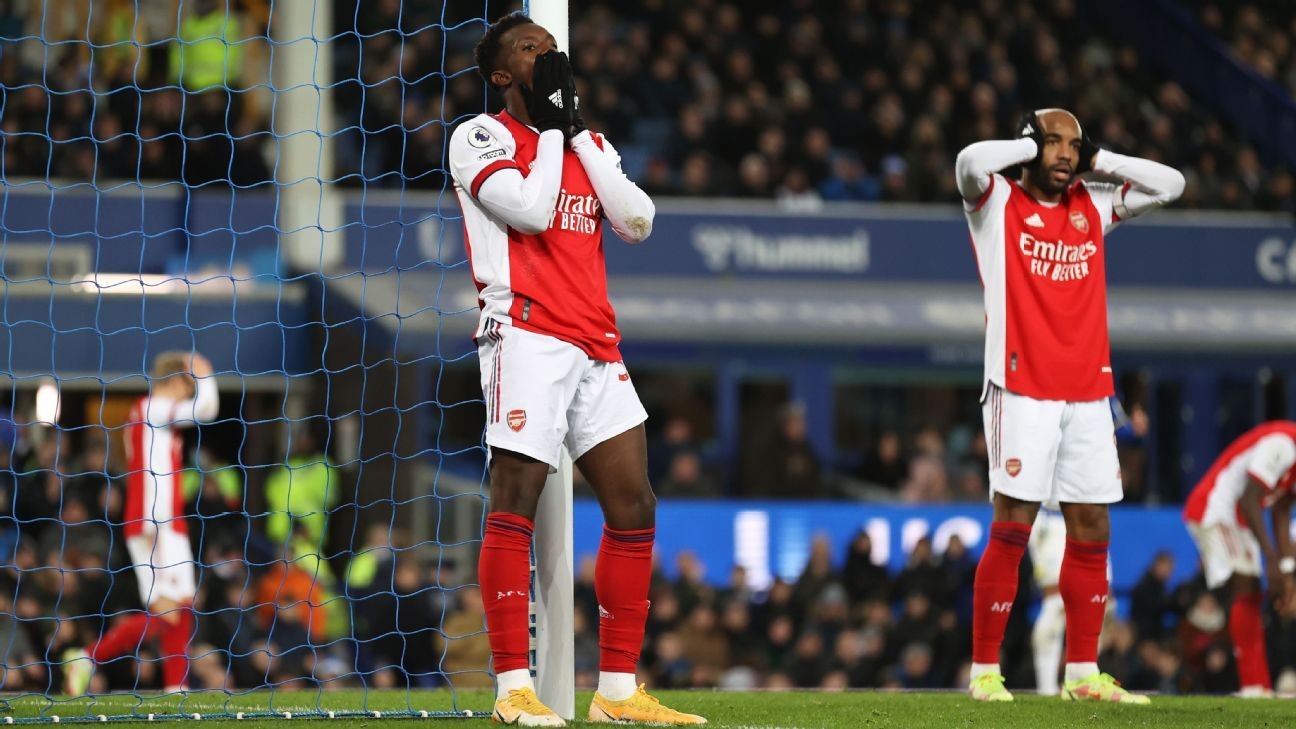 Arsenal were left stunned on Monday as Everton came from behind to beat Mikel Arteta's men 2-1 at Goodison Park.

Richarlison was twice denied a place on the scoresheet courtesy of VAR rulings, but it was third time lucky as he grabbed an equaliser for the Toffees after Martin Odegaard's well-placed strike just before half-time. Then, in the second minute of stoppage time, Demarai Gray curled one in off the post to send the blue half of Merseyside into an absolute frenzy.

The slow, methodical nature of Arsenal's passing movements regularly stifled Everton's ability to come forward and prevented Rafa Benitez's men from building too much momentum. It certainly wasn't the prettiest of performances and the result showed that, but at times, the Gunners looked dangerous on the counterattack and it was often some questionable finishing that let them down.

Whenever Everton had a burst of energy through the middle of the park, or even down the flank, Arsenal panicked. They reverted back to the side we've come to expect for so many years now with the kind of fragility and nervousness that has set them back as an elite team in English football. They were sloppy in aerial duels, were pushed to the brink at will and showed a lack of consistent creativity.

6 -- Arteta changed up his starting XI and from the first whistle, everything felt a little bit more conservative. They were nervous when pulling the trigger, looked happy to sit back and didn't want to take any risks. The biggest worry, though, was how quickly they collapsed in the last quarter of the evening with the Spaniard resembling a shell of the man who went toe to toe with Jurgen Klopp just a few weeks ago -- especially with regards to the Kieran Tierney substitution.

GK Aaron Ramsdale, 6 -- The star keeper had some nice distribution and pulled out a handful of good saves, but was ultimately let down by a sombre display from the defence.

DF Kieran Tierney, 6 -- His delightful assist for Arsenal's goal and overall work rate offers up more confusion regarding his substitution.

DF Gabriel, 5 -- While he does guard the ball nicely, there's an argument to be made that Gabriel was partially at fault for both Everton goals.

DF Ben White, 4 -- Would struggle to communicate with Siri based on this outing with the £50 million man looking scared all evening long.

DF Takehiro Tomiyasu, 5 -- Often resembled a lost puppy with his inability to track back for the winner highlighting his inexperience at this level.

MF Granit Xhaka, 5 -- It's always nice to see Xhaka winning fouls and getting physical but in the end, he couldn't control the midfield as he would've liked.

MF Thomas Partey, 4 -- The Partey habit of shooting from 30 yards out was the most notable thing he produced in another underwhelming showcase.

MF Bukayo Saka, 5 -- Was silent for long spells and just couldn't get into any kind of stride with Everton constantly muscling him off the ball.

MF Martin Odegaard, 7 -- Regularly fought to get Arsenal a foothold in the game and even scored a nice volley to make it 1-0.

MF Gabriel Martinelli, 6 -- Chased down every loose passage of play, exploited open space well and was as active as you'd expect him to be.

FW Alexandre Lacazette, 5 -- Had to drop far too deep just to get any kind of service, with his only major contribution being a nice touch in the build-up to the opener.

DF Nuno Tavares, 4 -- The man who never stops running forgot to pick up his man in the box and, subsequently, contributed to Everton's equaliser.

FW Eddie Nketiah, N/R -- Somehow managed to miss a gilt-edged opportunity to give Arsenal a 2-1 advantage in the 84th minute.

FW Pierre-Emerick Aubameyang, N/R -- Barely even got a sniff up top and felt like more of a desperation substitute than anything else before a crucial miss with the last kick of the game.