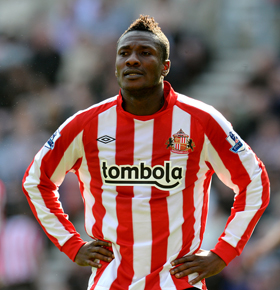 Ghana striker Asamoah Gyan suffered a thigh injury when playing for his country during Friday's Africa Cup of Nations qualifier.

The Sunderland player was taken off in the 36th minute of their Group I match against Swaziland in Accra.

Gyan was withdrawn with what looked like a hamstring injury and he is now doubtful for Tuesday's clash against Brazil in London.

Ghana team doctors will carry out tests on the striker on Saturday to determine the extent of injury.

If the injury proves to be serious, it will leave Sunderland short of striking cover with only Bentdner as the other top recognised striker in the team.

Sunderland will play their next league match next week.