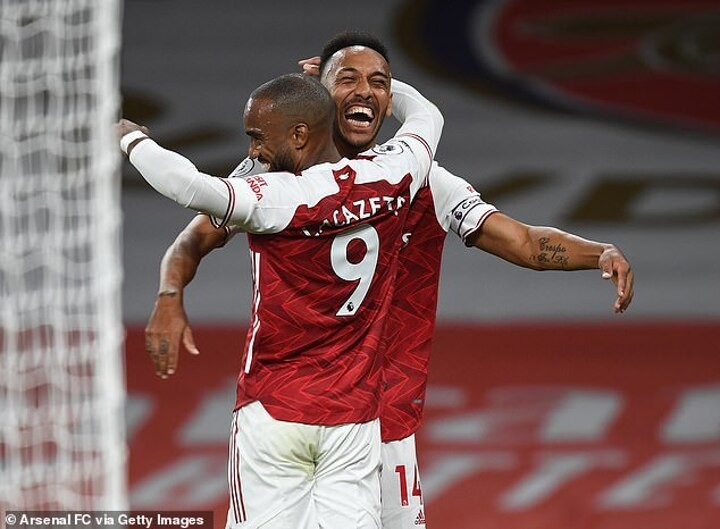 Arsenal strikers Pierre-Emerick Aubameyang and Alexandre Lacazette have jokingly argued about who will get the No 10 shirt with Mesut Ozil leaving the club.

Ozil, who has worn the No 10 shirt since 2018, is set to join Fenerbahce, with the midfielder telling Turkish television channel NTV that he is 'very excited' about the transfer.

Aubameyang, who wears No 14, and Lacazette, who has the No 9 shirt, both seemingly want to take the No 10 shirt when it becomes available ahead of next season.

Lacazette posted a picture of himself and Aubameyang pointing at each other in training along with the well-known Spider-Man pointing at Spider-Man meme.

The French forward added the caption: ''When you both want the number 10.'

Aubameyang responded by writing: 'They said they put it away' before adding a series of laughing emojis. He then added: 'all yours my bro'.

Lacazette then told Ozil that he will take good care of his number. He wrote: '@M10_official It will be in good care'.

In recent seasons the No 10 shirt at Arsenal has been worn by players including Jack Wilshere, Robin van Persie, William Gallas and the legendary Dennis Bergkamp.

Lacazette previously wore the No 10 shirt when he was at Lyon.

Ozil is leaving Arsenal after seven-and-a-half years, with his £350,000-a-week contract with the Gunners having been terminated.

The former Germany international fell out of favour under Mikel Arteta and didn't play at all for Arsenal this season having been left out of the club's squads for both the Premier League and the Europa League.

Ozil arrived in Istanbul late on Sunday evening, with Fenerbahce tweeting some pictures of their impending signing, alongside the message: 'Our club is bringing Mesut Ozil to Istanbul to continue the transfer processes.'

Speaking about the move, Ozil told NTV: 'I am a Fenerbahce fan. That is why I am very happy to be coming to Turkey with Fenerbahce, I'm very excited. God gave me the chance to wear this jersey as a Fenerbahce fan. God willing, I will carry it with honour and do everything I can for the team.

'Of course, I'm missing a few matches. I haven't played in a match in a while, but I am physically fit, I have no issues,' he said, adding he had been training with the first team at Arsenal during his time off the pitch.